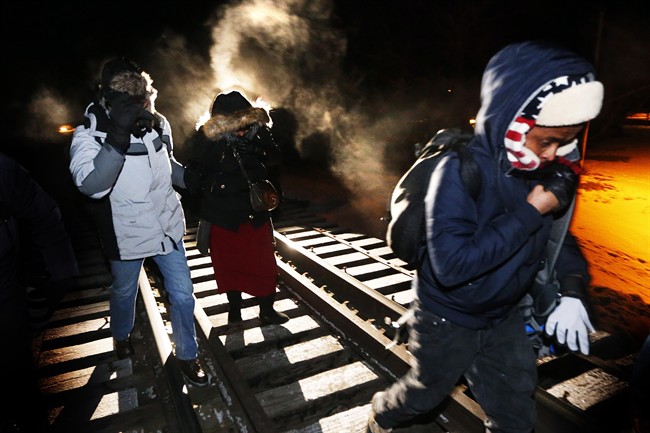 Asylum seekers from Somalia cross into Canada illegally from the United States by walking down a train track into the town of Emerson, Man., early Sunday morning, Feb.26, 2017. (THE CANADIAN PRESS/John Woods)

A man who was wanting to make a refugee claim ended up being charged after illegally crossing the border at Emerson, Manitoba on April 8.

RCMP apprehended the Minneapolis man just before 1 a.m. after the Canada Border Services Agency requested assistance. The man was searched, identified and screened before being taken to a holding cell.

While in the cell waiting to be processed, RCMP say the man threatened to harm CBSA officers, damaged a fire sprinkler inside his cell — causing water to spray everywhere — and physically assaulted an officer.

Ahmed Aden Ali, 37, has been charged with two counts of uttering threats, mischief over $5,000 and assaulting a peace officer.