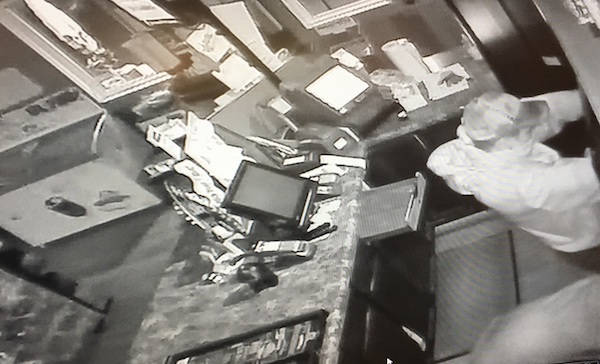 One of two suspects was caught on surveillance video during a robbery from a gas station in Notre-Dame-de-Lourdes, Manitoba on Tuesday, April 11, 2017. (RCMP HANDOUT)

Treherne RCMP are looking for two suspects accused of breaking into two businesses in St. Claude and Notre-Dame-de-Lourdes on Tuesday.

RCMP responded to an alarm at a gas station at around 2:45 a.m. where they found the front door had been smashed in. Thieves made off with the cash register.

A second call came in approximately 45 minutes later at a convenience store in Notre-Dame-de-Lourdes.

They ended up taking off in a stolen truck from the Mariapolis area with an undisclosed amount of cigarettes.

Suspect #1:
Described as being in his early 20’s with medium build, short hair with sideburns, wearing dark-coloured clothing, a camouflaged baseball cap, and white runners.

Suspect #2:
Described as having a medium build, dark-coloured clothing and white runners.