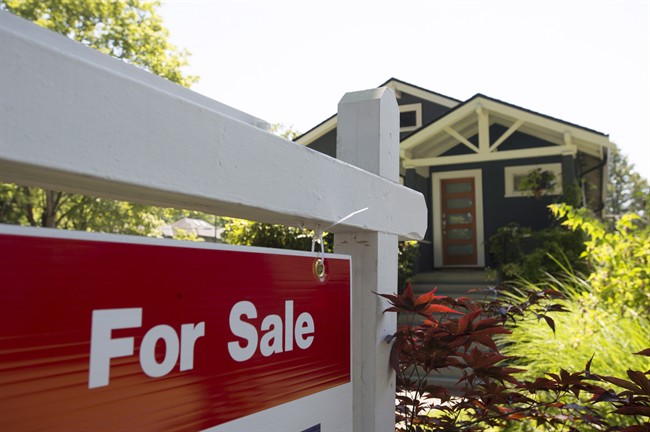 A sold sign is pictured outside a home in Vancouver, B.C., Tuesday, June, 28, 2016. (THE CANADIAN PRESS/Jonathan Hayward)

NEEPAWA, Man. — Like an impending disaster, the housing market in two of Canada’s largest cities is hard to take your eyes off of. While we may be watching from a safe distance, one way or another, it’s going to have an impact across the country.

A decade ago, our decision to move back to Manitoba was prompted in part by the high housing prices in Vancouver. Over the last 10 years, prices have only climbed higher. In January 2016, the average price for detached houses in the Lower Mainland (which includes more than just the city of Vancouver), hit a high of $1.83 million, well beyond the reach of most average homeowners.

In B.C., two new taxes were introduced last year to help try and bring prices down. One is a higher tax rate on the portion of a home’s selling price above $2 million and the second, a 15 percent tax on foreign home buyers in Metro Vancouver, which covers 21 municipalities. The taxes seem to be having the intended effect, in January 2017, prices saw a 17.8 percent decrease to an average of $1.5 million.

With the situation in Vancouver cooling, attention has turned to Toronto, where words such as “bubble” and “dizzying” are being increasingly used to describe the real estate market. Recent real estate reports show that compared to March 2016, homes in the Greater Toronto Area sold for 33.2 percent more in March 2017. In comparison, nothing else in the economy has risen that much: economic output rose about 2.3 percent on an annualized basis, hourly wages for those aged 25 to 54 rose by 1.7 percent in the last year and the Canadian stock market put in extremely strong results, rising 21 percent in 2016.

Like in Vancouver, many point to an influx of offshore money as one of the drivers behind high prices. As one person put it, overseas investors are using Canadians homes as gold bars, a safe place to park their money while they ride out turbulence in other financial instruments. Not only that, with such rapidly rising housing prices, people are buying homes with the sole intention of speculating in the market.

The problem is that using homes as purely financial investments creates a slew of problems. When homes are taken out of the housing market, for either ownership or rental, that city’s residents are left scrambling to find housing. Additionally, vacant homes hollow out neighbourhoods and impact local businesses expecting to have residents to serve.

For comparison’s sake, Farm Credit Canada just released their report on average farmland values in 2016. Last year, Canadian farmland rose in value by 7.9 percent. FCC divides the country into 51 regions and in seven of those, there were no increases in value. In Manitoba, the value of farmland rose by 8.1 percent.

Perhaps the difference is that farmland’s value is much more closely tied to the value of what it can generate. J.P. Gervais, FCC’s chief agricultural economist, cautioned producers not to become overly confident in the rising values, noting that crop receipts have increased at a slower rate than farmland values over the past few years. Such a reality isn’t present in home prices, whose value is limited only to how much someone will pay for it, and when the prospective purchases aren’t just those making a living in that area, the ceiling becomes much higher.

The GTA is home to 6.418 million people, just under 18 percent of the entire population of Canada. Right now, both the Ontario and federal governments are being called upon to help cool the Toronto market and its safe to say that whatever changes comes, either through government intervention or market correction, will have a ripple effect throughout the country. It’s the elephant in our country’s real estate room.