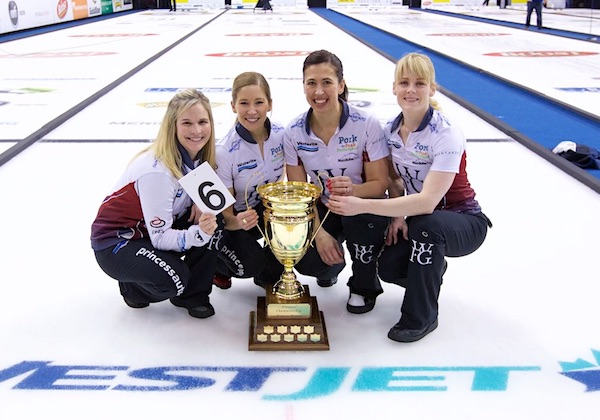 The Winnipeg skip downed Edmonton’s Val Sweeting 8-4 on Sunday to capture the Players’ Championship for the sixth time in her career.

“It’s amazing,” said Jones. “We were a little bit disappointed not being at the Scotties and we really focused on playing well here, so to come and win the event, it’s great.

“I’m really proud of the girls.”

Jones, backed by third Kaitlyn Lawes, second Jill Officer and lead Dawn McEwen, scored a deuce in the opening end only to have Sweeting respond with two of her own in the second. Jones then grabbed three in the third and never looked back.

Sweeting had singles in the third and fourth ends to make it 5-4, but Jones added another two in the sixth and a single in the seventh, with the two skips shaking hands without playing the eighth.

It wasn’t all bad news for Sweeting and her crew on Sunday.

On the men’s side Sweden’s Niklas Edin continued his dominance on the Grand Slam Tour.

It’s the third Grand Slam of Curling trophy of the season for Edin’s team of third Oskar Eriksson, second Rasmus Wrana and lead Christoffer Sundgren. They also won the Masters and Tour Challenge.

“This is probably the toughest event to win as well. Every team has had a long and good season,” said Edin. “To even qualify for this event, where everyone is usually playing well at this time of the year, especially after the Brier and the worlds, is a great accomplishment.”

Like Sweeting, Edin, who recently took silver at the men’s world championships, also earned the men’s Rogers Grand Slam Cup for earning the most points of any skip.

The Swedish rink trailed 3-2 after five ends, but scored singles in each of the next three for the victory.

McEwen, backed by third B.J. Neufeld, second Matt Wozniak and lead Denni Neufeld, was playing in his third Players’ Championship final, and has now settled for runner up in each of the three after losses in 2013 and 2015.