Leanne Pearson Pops Up in Winnipeg for Acoustic Pop-Up Performance 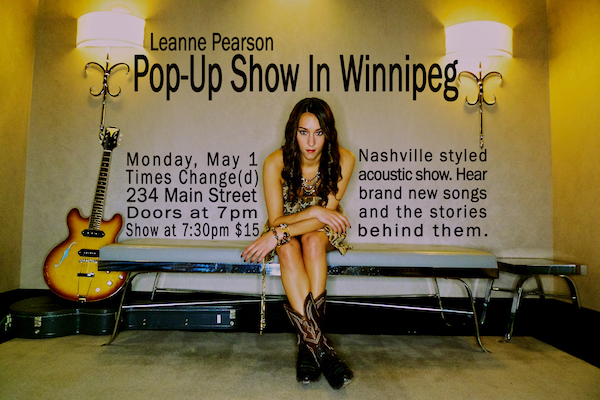 WINNIPEG — Who knew that a two-week visit to her hometown for Easter would serve as the impromptu catalyst for an upcoming special appearance by Winnipeg country rocker Leanne Pearson.

Pearson recently moved to Nashville, Tennessee. While she was breaking bread this past weekend with relatives, her and the 27-year-old’s cousin’s husband, John Scoles, hatched a plan to have her perform a “pop-up” performance May 1 at Times Change(d) High & Lonesome Club on Main Street, which he owns. 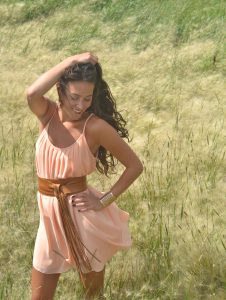 Leanne Pearson is back in Winnipeg for a pop-up acoustic show on May 1. Tickets are available for $15 through Ticketfly.com. (HANDOUT)

“People caught wind that I was in town, and we thought what a perfect opportunity for me to get up on stage and play acoustic guitar performing the new music I have coming out very shortly,” she said. “How awesome to be live and in front of my loyal fans, friends and family who have supported me?”

Pearson, who has been getting a kick out of sleeping in her childhood single bed (minus the few times she says she’s fallen out of it in the middle of the night), is pumped for the gig. It will be without her band, which she said is what defines this as a pop-up event.

“This has become a very common thing with musicians,” she explained. “Taking the time to sing while also getting a chance to tell the stories behind your songs. I haven’t really done that here at home, yet it happens a lot in Nashville when you attend writer’s nights and just kind of ‘pop-up’ and do your thing.”

The quick-witted writer and songstress was awarded “Best Local Artist” at the 2015 Winnipeg Night Life Awards. She also received “Emerging Artist of the Year” at the 2015 Manitoba Country Music Awards.

“Get Outta My Heart” hit Top 48 on the Canadian Country Music Charts. CMT added the quirky music video to its rotation, which turned heads across the country. The follow-up single, “The Only Thing,” hit the Top 90.

All accolades aside, her fan base means the world to Pearson. In fact, in 2015, she collected a collage of pictures submitted by those who love her and her music to create the video “Worth Fighting For.”

“The feedback from my fans is always so incredible, and this was my way of thanking them for their support.”

Those who want to hear Pearson perform Monday, May 1 at Times Change(d) High & Lonesome Club can get their $15 tickets through Ticketfly.com.

“I am so looking forward to this, and for the people who come, there are prizes too,” Pearson said beaming.

“I have partnered with a few Manitoba companies, including Silver Jeans, Manitoba Harvest Hemp Foods and Manitoba Milling Co. There will be Manitoba Flax Seed giveaways at the show and amazing Tennessee chocolate.”