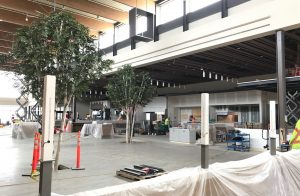 The food hall at Outlet Collection Winnipeg during a tour, Thursday, April 20, 2017. (CHRISD.CA)

WINNIPEG — The province’s first dedicated outlet shopping centre is just under two weeks away from opening its doors to eager shoppers.

Outlet Collection Winnipeg, in the city’s southwest, will boast 400,000-square-feet with up to 100 retailers under its roof.

John Scott, senior vice-president of development with Ivanhoe Cambridge, says to have an outlet-only centre in one building differentiates Outlet Collection from the single outlet stores scattered across Winnipeg.

“In this market, there really is the missing portion of the retail hierarchy of the pure outlet,” he said. “The fact that it’s all together under one roof… is very unique to the outlet development game.”

During a media tour on Thursday, about 1,200 construction workers were on site across the 570,000-square-feet of property, racing to make the opening day deadline of May 3.

Scott downplayed any scepticism that they wouldn’t be ready by 10 a.m. in 13 days from now.

A job fair to fill some 1,000 retail positions was held in March during a two-day hiring blitz.

Ivanhoe Cambridge, Forster Projects and Harvard Development is behind the $200 million project, which broke ground in September 2015 at the corner of Sterling Lyon Parkway and Kenaston Boulevard.

Aside from the outlet mall, a McDonald’s will open nearby on the property’s doorstep by this summer, with Hilton Garden Inn opening at a later date.