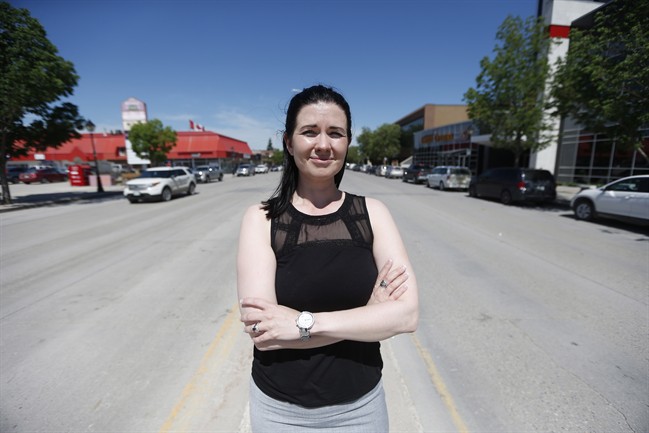 Michelle McHale, who is organizing the first-ever pride march in Steinbach, Manitoba, is photographed on the route in Steinbach Friday, June 24, 2016. (THE CANADIAN PRESS/John Woods)

WINNIPEG – One of the candidates for the leadership of Manitoba’s New Democratic Party is dropping out of the race.

Michelle McHale says she is no longer running because of personal health concerns, which she did not specify.

The decision leaves Wab Kinew as the only candidate so far for the leadership, which will be decided Sept. 16.

McHale has never held elected office and her campaign did not attract any big-name endorsements.

She gained national prominence last year when she organized the first-ever Pride parade in Steinbach, Man.

McHale says she respects Kinew but is not declaring her support for anyone at this stage.

“This was an incredibly difficult decision for me, but after taking some time to reflect and talk to my family, I know I need to put my health first right now,” McHale said Saturday in a written statement.

“I hope the party and its current and future members find a leader who will unify and strengthen our party, and help us be a progressive voice for all Manitobans.”

The NDP is trying to rebuild after losing last year’s election — a defeat that prompted then-premier Greg Selinger to resign.

McHale, who has worked in the labour movement and only joined the NDP a year ago, was considered an outsider.

Kinew, who was first elected to the legislature last year, has garnered support from some former key advisers to Selinger.

He is also being backed by supporters of former cabinet minister Theresa Oswald, who challenged Selinger’s leadership and came within 33 votes of toppling him in 2015.

Any other potential leadership candidates have until July 15 to enter the race.