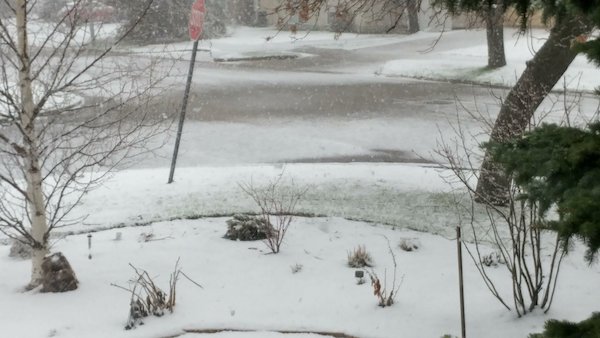 Snowfall accumulation is expected to be about two centimetres in Winnipeg on Saturday. (JOHN ERWIN / @CANWXCHASER / TWITTER)

WINNIPEG — Hopefully, you haven’t changed out your winter tires just yet.

Winnipeg woke up on a Saturday in mid-April to falling flakes mixed with rain, which later just turned into a steady stream of snow falling to the ground. Spring, right?

Environment Canada says the city can expect about two centimetres by this afternoon before the system tapers off.

It’s a drastic change from Friday, which saw temperatures soar to 17°C with plenty of sunshine. Sunday looks to be somewhat more favourable with sunshine and a measly high of 4°C.

Some local Earth Day activities have been cancelled or postponed today as a result of the weather.

Outside of the city, some area highways were reportedly experiencing icy conditions. Updated road information can be found at Manitoba511.ca.

Need a tissue? Grab a handkerchief as they fall from the sky! #Winnipeg #mbstorm pic.twitter.com/hXkn3nYEcJ