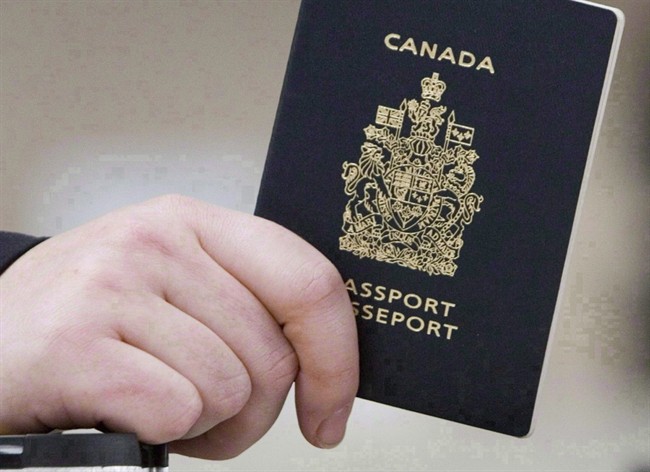 A passenger holds a Canadian passport before boarding a flight in Ottawa on Jan 23, 2007. The federal government has been quietly making changes to passport offices in a bid to improve security and address concerns that the facilities could be easy targets for a terrorist attack. (THE CANADIAN PRESS/Tom Hanson)

OTTAWA – The federal government has been quietly making changes to passport offices in a bid to improve security and address concerns that the facilities could be easy targets for a terrorist attack.

Civil servants in passport and other government offices have for years faced bomb threats, and hostility from individuals who are disgruntled, drunk or suffering mental illnesses.

Internal government documents show that senior officials have more recently worried that someone with extremist views might see a passport office as prime target for an attack, particularly if the federal government revoked their passport privileges because they wanted to go abroad to join a terrorist group.

The briefing note to senior officials at Employment and Social Development Canada says the offices could now more easily become targets, or be collateral damage.

“ESDC Passport offices may be considered targets of symbolic value in future attacks,” reads part of the 2015 briefing note marked, “Canadian Eyes Only.”

The Canadian Press obtained a copy of the documents under the Access to Information Act.

Those concerns were stoked after two separate domestic terrorist attacks in October 2014.

In the first case, Martin Couture-Rouleau hit two soldiers with his car at a strip mall just outside St-Jean-sur-Richelieu, Que., killing Warrant Officer Patrice Vincent, 53. Officials seized his passport that July after police prevented him from flying to Turkey.

Michael Zehaf-Bibeau killed Cpl. Nathan Cirillo at the National War Memorial in Ottawa before storming Parliament Hill. He had come to Ottawa from Vancouver after he ran into problems getting a Canadian passport so he could travel to Libya.

Both attackers were subsequently killed.

The second incident prompted ESDC officials to call in the Mounties to review threats for every passport office in the country. Assessments were also carried out to see what could be done to the physical configuration of spaces, or the layout of services, to better protect the workers inside the office.

The RCMP report from April 2015 concluded that the offices face terrorist and criminal threats, although nothing direct or immediate.

A spokesman for ESDC, which oversees the 151 Service Canada offices that issue passports, said the department has and continues to make changes at existing and soon-to-be-opened facilities in response to the assessments.

Along with physical changes to the offices to increase security there have been operational changes that federal officials hope will lower the risk of an attack. Among the measures was extending the passport renewal period to 10 years from five years and letting Canadians renew their passports online to reduce the number of people who had to go to an office.

The chairman of the Senate’s national security committee, which has studied terrorist threats to Canada, said that keeping passport offices secure has to be part of a larger conversation about how to keep people safe in public spaces. Conservative Sen. Daniel Lang said there are some 60 individuals in Canada who went abroad to join a terrorist group, and the country’s spy agency is tracking 218 counter-terrorism targets in Canada.

“Some of these individuals … mean to cause significant harm and even mass murder,” Lang said.

← Previous: Winnipeg in Store for 5-10 Centimetres of Snow on Monday Next: Kings of Leon with Dawes at MTS Centre in October →
Tags: Canada | Ontario | Ottawa