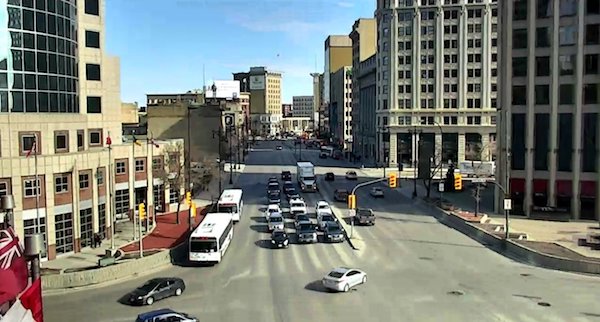 The city is taking steps to ease traffic congestion on Main Street leading into Winnipeg’s downtown. (CITY OF WINNIPEG / TWITTER)

WINNIPEG — Motorists who use southbound Main Street as part of their daily commute were likely caught up in a traffic mess earlier this week.

Traffic could be seen snarled from Main Street near the Exchange District all the way north to Redwood Avenue.

The City of Winnipeg has blamed the traffic on a software update of the Traffic Signals Management System on Tuesday, where some intersections were temporarily disconnected from the signals system. The issue was fixed later that day.

To further alleviate traffic congestion on Main, the city is installing additional signage to warn of upcoming lane closures that are expected to be in place until May 12 on southbound Main Street between Portage Avenue and Graham Avenue.