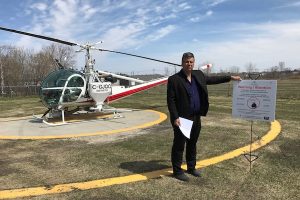 Ken Nawolsky, superintendent of insect control, at the City of Winnipeg’s heliport on Tyne Avenue, Monday, May 1, 2017. (CHRISD.CA)

New Transport Canada guidelines have changed the way the City of Winnipeg handles fly-over larviciding efforts as part of its insect control program.

New this season, signs will be posted in public areas where many people tend to congregate, alerting them that the city will be using helicopters to apply larvicides. Signage will pop up in athletic fields, larger parks, and golf courses 24 hours in advance with a date and time the treatment is scheduled to occur.

Access to these areas will be restricted 20 minutes before and during treatment, which generally takes between 15-60 minutes.

The new signage is a safety precaution in the event one of the four helicopters experienced mechanical troubles. Treatment is aimed to take place as early in the morning as possible using longer lasting larvicides to limit the number of applications required over the season.

The new procedures will cost the city an additional $135,000 this year.

On the mosquito front, monitoring for adult nuisance mosquitoes in New Jersey light traps is already underway, with the first trap counts to be reported on Wednesday on the city’s website.

“This spring, the ground is saturated which has resulted in a lot of standing water and the need for a substantial spring larviciding program for the control of the spring mosquito species,” said Ken Nawolsky, superintendent of insect control.

The city monitors and treats more than 31,500 hectares of water area on an ongoing basis based on weather conditions.