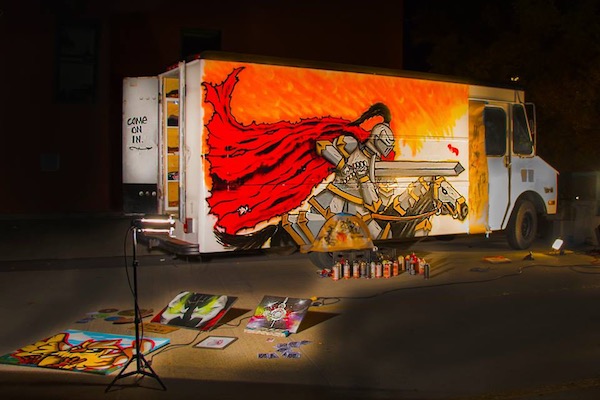 A Winnipeg entrepreneur and fashion designer is on the move — literally. Eric Olek is the owner of NOMAD, the first mobile clothing boutique in Winnipeg.

You may already know of Olek based on his popular streetwear clothing brand, Friday Knights, which is heavily shared on social media among Winnipeg’s fashion crowd.

Now Olek is taking his designs and putting them on wheels in a mobile retail setting through a new venture housed inside of a 1991 box truck.

“The goal has always been to promote innovation within street culture. We live in a generation with a very entrepreneurial mindset. People are always busy, always grinding, always moving — so that’s what NOMAD is going to do too,” he said.

The truck is outfitted with racks and shelves, creating an environment for customers in the market for contemporary menswear to feel like they’re shopping in a regular store.

A soft launch of the pop-up NOMAD truck happened last fall during Nuit Blanche as local artist Peatr Thomas spray-painted a mural on its side.

After spending the last two summers making repairs to the truck, Olek says it’s officially ready to make its debut. NOMAD will be set up outside Little Brown Jug Brewery this Saturday and outside King + Bannatyne on May 13.