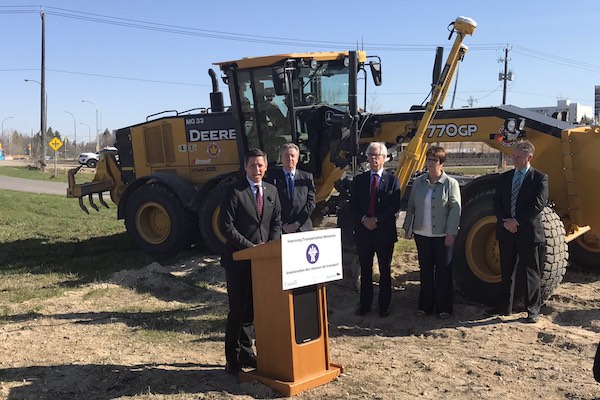 Winnipeg Mayor Brian Bowman speaks during a news conference regarding the Waverley Underpass on Friday, May 5, 2017. (KATE FENSKE / CN / TWITTER)

WINNIPEG — Construction is already well underway, but the three levels of government marked Friday as the official start of the Waverley Underpass project.

Meant to ease traffic congestion in the area of Waverley Street and Taylor Avenue, the $155 million project will replace the existing CN railway crossing with an underpass.

More than 30,000 vehicles and 40 trains pass through the busy intersection daily.

The rehabilitation project will also widen Taylor between Waverley and Lindsay Street to four lanes.

During construction, a four-lane detour road will allow for the continued flow of traffic in the area, as well as accommodate pedestrians and cyclists. Improvements are also scheduled for the Grant Avenue and Waverley Street intersection and the rehabilitation of Waverley Street between Mathers and Grant Avenues.

The province and Ottawa are contributing $45.9 million, while the city will cover the balance. CN is also contributing $9.5 million to the city’s share of the project.

The Waverley Underpass is expected to open by the end of 2019 with some minor work such as landscaping continuing into 2020.