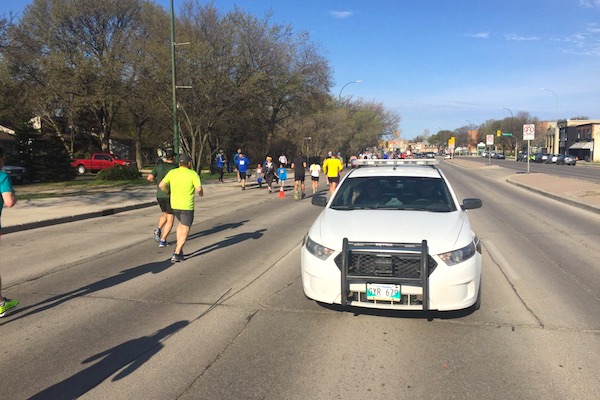 Runners along the Winnipeg Police Service Half Marathon route on Sunday, May 7, 2017. (@WPGPOLICE / TWITTER) 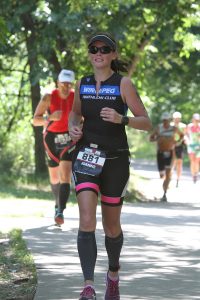 WINNIPEG — Runners woke up and laced up at the crack of dawn Sunday for the Winnipeg Police Service Half Marathon.

The annual event at Assiniboine Park raises funds for the Canadian Cancer Society with support this year for brain cancer research.

“Just a few months ago, we were sadly reminded about the realities of a cancer diagnosis with the loss of a WPS Half Marathon legend, Joanne Scheiwe,” wrote race director Nick Paulet on the marathon’s website.

Following the marathon, the Canadian Cancer Society awarded its highest national honour, the Medal of Courage, in Scheiwe’s honour.

“Joanne touched so many lives and made such a difference on so many levels,” Canadian Cancer Society, Manitoba volunteer chairperson Elmer Gomes said. “We honour her tenacity, her spirit and her courage today with this award.
“Her lasting legacy is how she continues to inspire us to do better and do more.”

Brain cancer kills nearly 2,000 Canadians a year and is the leading cause of cancer death among children under 14.

Schiewe raised nearly $80,000 to fund brain cancer research in the last two years of her battle. A fundraising page in her honour this year pushed her fundraising total to more than $110,000.

Schiewe was also credited with helping the Cancer Society convince the Manitoba government to cover the costs of cancer drugs taken outside hospitals.

Nearly 2,900 runners were expected to come out. Police asked for the patience of motorists as the two-person relay and 5K race made its way through the city.

Handing out medals at the finish line. Congratulations to all the @WPSHalfMarathon runners! pic.twitter.com/m0fZiLM1et