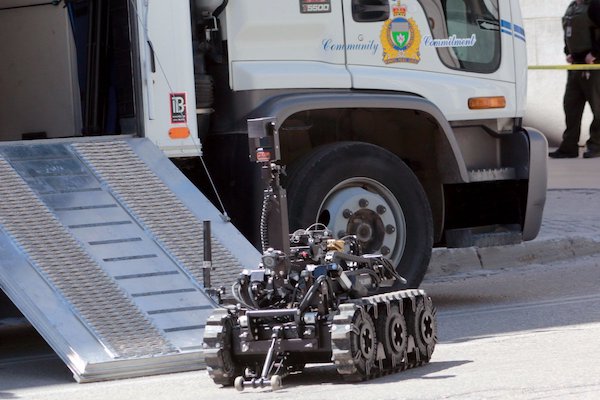 A Winnipeg police robot works at the scene of a suspicious package in downtown Winnipeg on Friday, May 12, 2017. (@WPGPOLICE / TWITTER)

Winnipeg police detonated a suspicious package in the downtown area on Friday after cordoning off the area for several hours.

The bomb unit was on scene near Portage Avenue and Garry Street at around 2:30 p.m. Roughly an hour later, police detonated the package using a controlled robot.

Police had closed Portage in both directions between Fort and Smith Streets, and southbound Garry between Ellice to Graham Avenues.

Police said the package turned out not to be a threat to public safety.

Traffic was beginning to flow again in the area shortly after 4 p.m.

Update: Bomb Unit has given the area at Portage & Garry the all clear. The area should be open to traffic shortly. Thx for your patience. pic.twitter.com/YcepLjsXCG