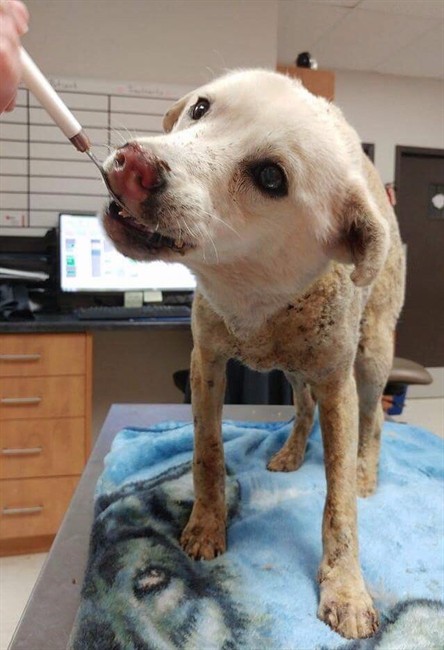 A dog with burns all over his body is shown in this recent handout photo. A dog has severe burns over its body after being thrown into a firepit in a community in northern Manitoba. Katie Powell, president and founder of Save a Dog Network Canada, says two kids between 10 and 12 years old took a family’s dog off a porch on Sunday and tossed him into a firepit on the Red Sucker Lake First Nation. (THE CANADIAN PRESS/HO – Save A Dog Network Canada, Katie Powell)

A reward of $5,000 is being offered for information leading to the arrest and conviction of those responsible for throwing a puppy into a firepit in Red Sucker Lake, Manitoba earlier this month.

Eight-month-old Polo was thrown into the pit on May 7, suffering second-degree burns to most of his body. He was flown to Winnipeg for treatment and is expected to recover, but not before healing from extensive injuries, including a swollen throat and lungs, ulcers on his eyes, and most of his fur being singed off.

PETA (People for the Ethical Treatment of Animals) has stepped up to offer the reward in hopes a conviction can be made.

RCMP are currently investigating, but haven’t been able to identify suspects in the animal cruelty case.

“Somebody out there tried to burn this puppy alive, leaving him with second-degree burns all over his body,” said PETA vice-president Colleen O’Brien.

“PETA urges anyone with information about this case to come forward immediately so that whoever tortured this dog can be held responsible and stopped from hurting anyone else.”

Anyone with information is asked to contact the Island Lake RCMP detachment at (204) 456-2290.