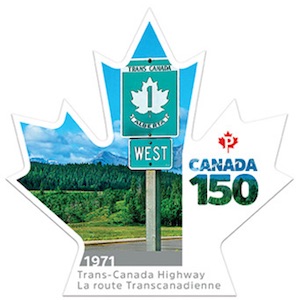 REGINA – The 8,000-kilometre highway that connects our country from east to west is celebrated in the latest stamp to mark Canada’s 150th birthday.

Award-winning country music star Dean Brody unveiled the Canada Post stamp today in Regina on a stop during his national tour along much of the iconic highway.

The maple-leaf-shaped stamp features a green-and-white Trans-Canada Highway marker with lush forest and the Rocky Mountains in the background.

Construction on the Trans-Canada began in 1950 and was completed in 1971 — although the highway was officially opened in 1962.

The ribbon of road runs through all 10 provinces from St. John’s, NL., to Victoria and is one of the longest national road systems in the world.

The stamp is the fifth of 10 being released by Canada Post to commemorate key moments in Canada’s 150-year history.

“We are joined by this amazing engineering feat, this highway that brings us all together,” Brody said in a statement Tuesday.

Other stamps already unveiled celebrate the Constitution and Charter of Rights and Freedoms; Expo 67; the Canadarm and Canadian innovation; and same-sex marriage equality.

The next stamp is to be unveiled in St. John’s on May 25. The last is coming out June 1, the day the whole set will go on sale.