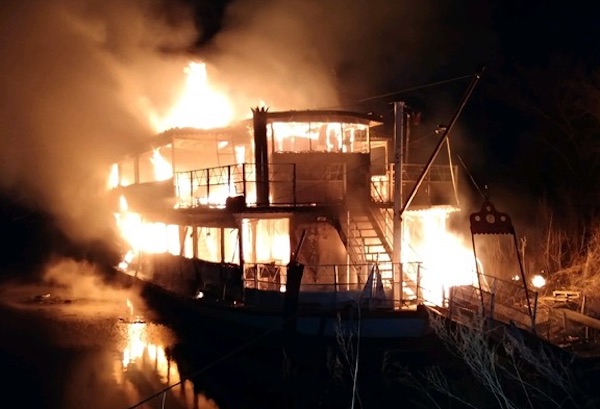 The Paddlewheel Princess was engulfed in flames early Tuesday, May 9, 2017. (SELKIRK FIRE DEPARTMENT)

SELKIRK, Man. – Four teenage boys have been charged with arson in a fire that destroyed a popular Manitoba paddlewheeler that plied the Red River for decades.

The Paddlewheel Princess was used for riverboat tours, but the owner sold it last year when he retired.

RCMP in Selkirk say three 17-year-olds and a 15-year-old have been released pending court dates.

Selkirk’s fire department received a call about a grass fire May 9, but when crews arrived the boat was engulfed in flames.

Crews had to fight the blaze from the shore because the paddlewheeler had been parked in a slough and was slanted in the water as it burned.

Firefighters were able to get the flames under control in two hours, but by then all that was left of the boat was a metal frame.