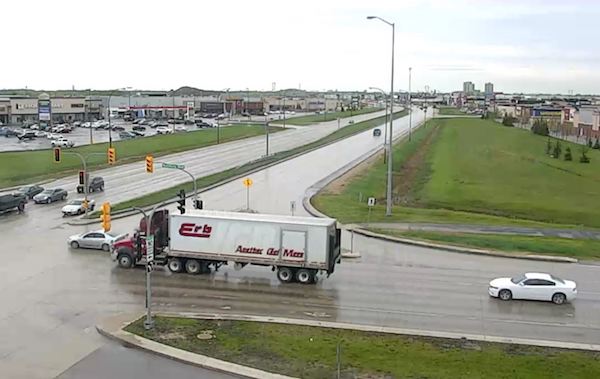 A traffic camera facing northbound on Kenaston Boulevard at McGillivray Boulevard on May 16, 2017. (@CITYOFWINNIPEG / TWITTER)

The City of Winnipeg is looking into how it can make its new traffic cameras available for online public viewing.

Since the city’s Traffic Management Centre opened in January, staff oversee all aspects of traffic flow within the city, including 70 live traffic cameras. Views from incidents are often shared on the city’s Twitter account moments after they happen in an effort to alert motorists to potential problem areas.

But if you want to see what’s happening in real-time on city streets, you won’t be so lucky.

Citing privacy concerns, the city says its traffic cameras are only available for staff to monitor. It’s a contrast to what the province currently does with its Manitoba 511 website, which publishes still images of traffic cameras throughout Manitoba.

“We want to make sure as a member of the public you have an expectation of privacy,” city spokesperson Ryan Patrick told ChrisD.ca.

“The standard setting of the camera does not show detail such as license plates or allow an individual to be identifiable, but for example, if there was a collision that damaged a traffic signal pole, the camera may be used to zoom in and check what exactly is damaged so the signals branch can assess remotely what is needed to repair the damage.”

Patrick says it’s situations like that in which the city wouldn’t want to live-stream a camera, potentially showing license plates, persons involved or any distressing scenes.

“We are looking into ways to show cameras on the web in a way that mitigates such risks.”

Until then, following @CityofWinnipeg on Twitter is the next best thing to getting a near real-time view of what’s happening on the streets.

Paired with a new partnership through Google’s Waze app, the TMC is making strides in improving traffic flow and alleviating congestion for motorists. The centre has an annual operating budget of $500,000 and is part of a $3.6 million investment by the city.