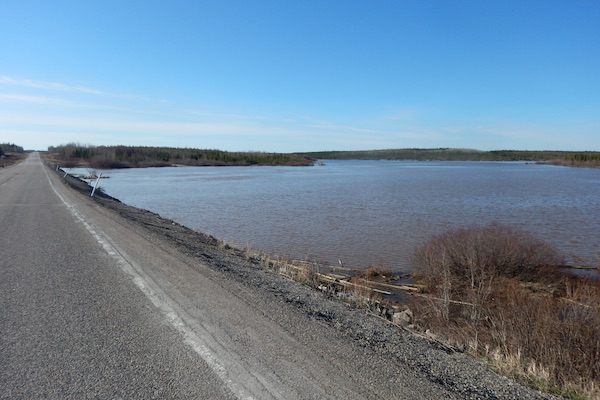 The Burntwood River causeway when four victims launched their canoe on Monday, May 22, 2017. (RCMP HANDOUT)

Two fathers and their two sons died Monday after their canoe capsized on the Burntwood River north of Thompson, Manitoba.

RCMP were alerted of the overdue canoeists and began a search operation with the help of other boaters in the area, as well as a helicopter.

Police found the boat and the four paddlers deceased in the water.

Family on social media identified the victims as Conor Sykes, 33, and his six-year-old son, Liam, and Shane Cripps, 44, and his 14-year-old son, Dylan.

The male victims — all residents of Thompson — were all wearing lifejackets.

“This is the worst result imaginable,” said Sergeant Ben Sewell of the Thompson RCMP.

“Thank you to everyone involved in the search. This is a devastating accident that has left the community of Thompson in mourning.”

The Burntwood River flows through the city of Thompson about 740 kilometres north of Winnipeg.