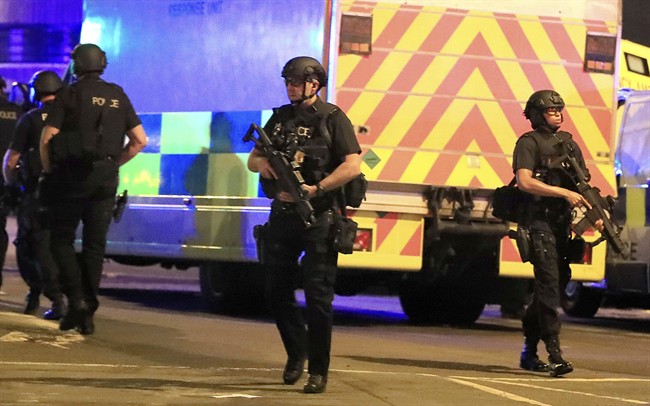 OTTAWA – Prime Minister Justin Trudeau says Canadians “are shocked by the news of the horrific attack in Manchester” and that federal officials are “still in the process of determining whether any Canadians have been impacted by this event.”

Trudeau issued a statement after police in the English city said 22 people were killed and at least 50 injured by an explosion near the end of a concert by American pop star Ariana Grande on Monday night.

Local authorities say they are treating the incident as a terrorist attack. There was no immediate claim of responsibility.

Trudeau said he was “devastated” when he heard about the “innocent victims who were killed or injured … many of them far too young.”

“On behalf of all Canadians, our deepest condolences go out to the families and friends of those who were killed. We also wish a speedy recovery to everyone who was injured,” added Trudeau.

“Canada and the United Kingdom are the closest of friends, and we stand together as a people in this most tragic of circumstances,” he added.

Trudeau said Canada will work with its allies and partners to “continue to counter such senseless acts and to fight terrorism in its many forms” and will do “all we can to assist British authorities in bringing those responsible to justice.”

He took to Twitter to say his thoughts and prayers are with the victims and their families and that all Canadians “stand firm” with the British people.

Federal NDP Leader Tom Mulcair joined other Canadian politicians in condemning the incident, calling it “devastating news,” adding, “all our love to Manchester and everyone affected by this terrible attack.”

Quebec Premier Philippe Couillard, who is currently on a trade mission to Israel, told a news conference in Tel Aviv on Tuesday that people must continue to live their lives as normal despite the threats of terrorism.

He said the Manchester attack must prompt officials to fight terrorism “without concession” and to do everything possible to prevent it.

B.C. Premier Christy Clark posted a tweet late Monday calling the attack “shocking and horrific” and that the thoughts of “all British Columbians are with the victims and their families.”

Toronto Mayor John Tory said the city stands in solidarity with the people of Manchester while Ontario Premier Kathleen Wynne also said in a tweet that she is “horrified” by the loss of life in the British city.

Ottawa is advising Canadians in the U.K. to avoid the affected area in Manchester. Global Affairs Canada said any Canadians in the English city who require emergency assistance should call toll-free at 00-800-2326-6831.

Manchester police say they are working with national police and intelligence agencies to gather information about the incident.

The explosion struck around 10:30 p.m. local time as Grande was ending the concert, part of her Dangerous Woman Tour.

Grande, who was not injured, later tweeted: “Broken. From the bottom of my heart, I am so so sorry. I don’t have words.”