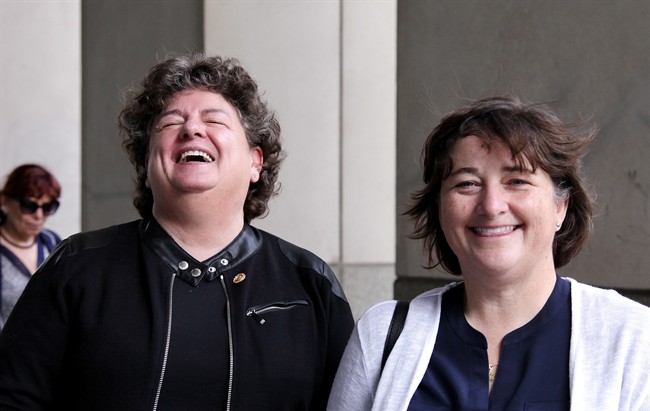 Retired RCMP officers Linda Davidson (left) and Janet Merlo share a laugh outside Federal Court in Toronto on Wednesday, May 24, 2017. Davidson and Merlo were representative plaintiffs in a class-action suit against the RCMP on behalf of sexually harassed female employees. (THE CANADIAN PRESS/Colin Perkel)

Speaking after a settlement hearing, the women expressed hope their long battle would pave the way for a more hospitable RCMP workplace.

“It’s not a happy day based upon the fact that we’ve had to take this action to get change,” said Linda Davidson, one of the representative plaintiffs. “That’s sad. It’s 2017.”

Davidson and fellow plaintiff Janet Merlo were among a few dozen women who sat in the courtroom or spilled into an overflow room as lawyers urged Federal Court Judge Ann Marie McDonald to sign off on the agreement in the case.

The deal, which the government did not oppose, would see current and former female employees who were harassed each receive at least $10,000 and as much as $220,000. The settlement also calls on the RCMP to fight harassment within its ranks.

Although the government has not admitted any wrongdoing, RCMP Commissioner Bob Paulson apologized publicly last October for what the women had endured. However, both Merlo and Davidson said they have begun to doubt his sincerity in light of recent damning reports about harassment in the force.

“Not only are they not changing, but they lack the will and ability to change,” Merlo said. “Hopefully, this court order will be what makes them change.”

As many as 20,000 RCMP employees, dating back to Sept. 16, 1974, when first female recruits were sworn in, are potentially eligible for compensation. However, the lawyers expected fewer women would actually apply.

According to the agreement, women eligible for the highest level of compensation suffered ongoing intimidation and bullying, forced penetrative sex acts, and other egregious harassment that resulted in suicidal thoughts or attempted suicide, sexual dysfunction, or the inability to work among other severe effects.

The government has set aside $100 million for claims but the lawyers stressed there is no cap. In severe cases, relatives of claimants are each eligible to receive five per cent of the award to the claimant — to a maximum of 10 per cent that would be shared if there are more than two affected relatives.

Merlo, who called the day bittersweet, said money could never compensate for the lost careers and broken relationships, but she took comfort that other RCMP women will now benefit.

Key among terms of the deal are provisions that shield claimants’ identities from the RCMP. Privacy is especially important for women who still work for the force, court heard.

“All of the information provided during the claims process, both written and oral, will be kept confidential,” co-counsel Megan McPhee told McDonald. “The RCMP does not receive any of the claims and has no right to respond.”

Government lawyer Mitchell Taylor said a “surprisingly” large number of women — 1,590 — had opted out of the settlement, most because they said they had not suffered any harassment or discrimination.

“We are proceeding nonetheless,” Taylor said. “We think it is a fair and proper settlement.”

Merlo, now of St. John’s, N.L., was an RCMP constable from 1991 to 2010 who suffered depression, panic attacks and other health effects due to her mistreatment. Davidson, 58, now of Bracebridge, Ont., started with the RCMP in 1985. She became one of the few women to become a commissioned officer, rising to the rank of inspector. Davidson took medical leave in 2009 and retired in 2012.

The claims process is to be overseen by former Supreme Court justice Michel Bastarache, who attended Wednesday’s approval hearing.

The government has also agreed to pay $12 million to the two law firms involved. In addition, the lawyers will earn 15 per cent of amounts awarded to claimants.

“We believe this is a superb settlement,” said lawyer David Klein, who represents Merlo “It was complex, high-risk litigation.”