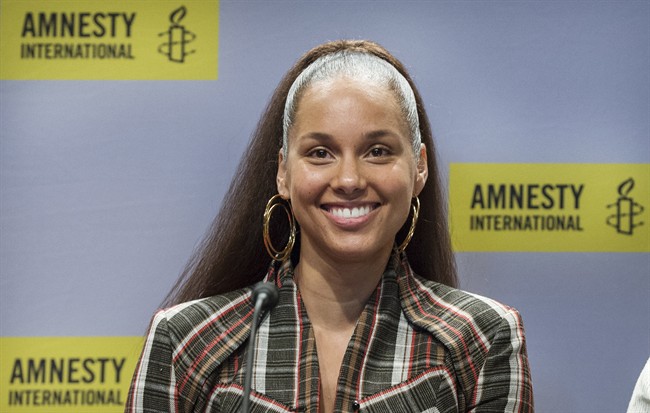 Alicia Keys speaks during a news conference prior to receiving an Ambassador of Conscience Award from Amnesty International recognizing those who have shown exceptional leadership in the fight for human rights in Montreal, Saturday, May 27, 2017. (THE CANADIAN PRESS/Graham Hughes)

MONTREAL – American recording artist and humanitarian Alicia Keys believes a change is coming, as people in both Canada and the United States wake up to the fight against inequality and injustice.

“There’s a veil that’s lifted so we’re not able to say anymore, ‘I didn’t know that,'” she said Saturday in Montreal, where she was honoured for her activism.

The award is presented each year to an artist and an activist who have stood up to injustice, inspired others and furthered the cause of human rights.

In an interview with The Canadian Press, Keys said she sees similarities between the struggle of indigenous communities in Canada and that of communities fighting for equal treatment in the United States.

“You start to see how our struggles and the issues we all care about are similar no matter where we live and I think that’s bringing us together so much more, as humanity, as people,” she continued.

Keys, who shot to fame as a songwriter and R&B artist, is known for her philanthropic work, including as co-founder of “Keep a Child Alive,” a non-profit providing treatment and care to families affected by HIV in Africa and India.

She also co-founded a group that encourages young people to mobilize for change and speak out on issues such as gun violence and criminal justice reform.

She said she believes people are increasingly aware of social inequality and are ready to do something to fight it.

“I do feel thoroughly confident that it’s rising such a powerful energy among the people — us the people. We are really feeling how important it is to be vocal and to take our beliefs and what we see around us and not accept it as it is.”

At a news conference ahead of the award ceremony, Keys said she was inspired by socially aware artists such as Nina Simone, Bob Dylan and Bob Marley, all of whom were able to use their art “as this beautiful vehicle to remind us of our own personal power.”

Despite the problems in the US and Canada, Keys stressed there’s a lot to be praised about both countries.

“There are far more good things than negative things overall, and the health care in Canada, I have to say, is quite impressive,” she said.

Alongside Keys, members of Canada’s indigenous rights movement were also recognized for their fight to end discrimination and improve living conditions in indigenous communities.

Morrison, who has been a leader in the push for a national inquiry into missing and murdered indigenous women, said she was deeply touched to receive the award.

“It’s amazing that the fight we’re having across Canada on so many different issues is finally being taken notice of,” she said.

Morrison said she hoped the award would pressure the Canadian government to “follow through on their promises to indigenous people” and act on issues such as problematic policing, the need for clean water on reserves and the lack of progress on the national inquiry.

Cindy Blackstock and Senator Murray Sinclair were also named as award recipients but did not attend the ceremony.