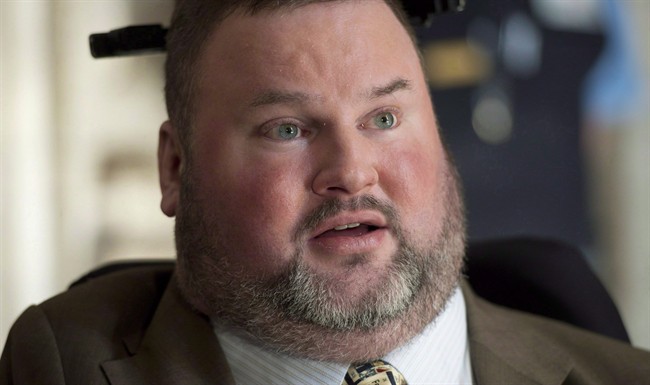 Conservative MP Steven Fletcher speaks with the media as he leaves caucus on Parliament Hill in Ottawa on March 26, 2014. (THE CANADIAN PRESS/Adrian Wyld)

WINNIPEG – A backbencher in Manitoba’s Progressive Conservative government says there are too many politicians in the legislature, and is hoping to chop eight of the province’s 57 seats.

Steven Fletcher, a former federal cabinet minister who has already shown a willingness to be at odds with his own governing party, is planning to introduce a private member’s bill Monday that he says would reduce the size of government and save the public a lot of money.

Private member’s bills usually fail to get enough support to become law, but Fletcher said Sunday he hopes to at least start a public discussion about the size of government in Manitoba.

“There are places even in my (area) where you could trip over and land in three provincial ridings,” said Fletcher, who represents the Assiniboia constituency in west Winnipeg.

Winnipeg alone has 31 legislature seats. The same area is served by 15 members of city council and eight federal members of Parliament.

Fletcher said cutting the number of legislature seats would mean fewer politician salaries, along with fewer expenses such as travel and support staff. The 44-year-old said the change would not be a big burden for himself and his legislature colleagues.

“Representing a provincial riding is nowhere near as onerous as a federal riding,” said Fletcher, who was a member of Parliament from 2004 to 2015, when he lost to Liberal Doug Eyolfson.

Fletcher would not say Sunday whether he has any support within the Tory caucus for his bill. He has been something of a lone wolf in caucus since being elected last year, and has had to look to other parties on occasion to get his bills introduced in the legislature.

Earlier this month, Fletcher went against his party’s line and criticized a government bill that would create a new Crown agency to promote energy efficiency. Premier Brian Pallister appeared displeased with the dissension but said any discipline would be dealt with behind closed caucus doors.

A political analyst said Pallister, who has a solid majority with 40 of the 57 legislature seats, could do well to let Fletcher wander a little from toeing the party line.

“If I was Brian Pallister, I’d tolerate a little bit of dissent to contribute to an image of himself as a leader who accepts that there can be internal disagreements within a party,” said Paul Thomas, professor emeritus of political studies at the University of Manitoba.

Pallister has shown no sign he’s considering kicking Fletcher out of caucus, but Thomas said there are other steps he might take.

“There are other ways in which Pallister could make life uncomfortable for Steven Fletcher, you know, whether he gets committee assignments, whether he gets his (election) nomination papers signed the next time around. But I don’t think it’s reached that point yet.”

Fletcher said he supports his Progressive Conservative team and seemed unconcerned about whether his dissension might affect his future career as a politician.

“I reached the top of my political career in my mid-30s, in the federal cabinet,” he said.

“I’ve been there, done that and I just want to do what’s good.”