By Ross Marowits, The Canadian Press 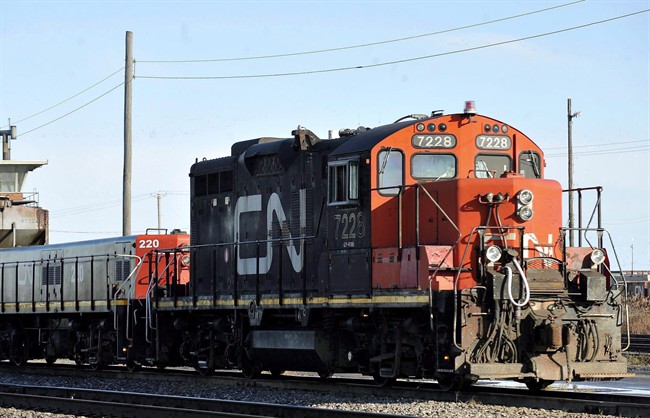 A CN locomotive goes through the CN Taschereau yard in Montreal, Saturday, Nov., 28, 2009. The union representing approximately 3,000 employees at Canadian National Railway says it has reached a verbal agreement with the company, hours before the workers were in a legal strike position. (THE CANADIAN PRESS/Graham Hughes)

he day at about 4:15 p.m. ET, after talks resumed following an overnight round of bargaining and hours before the workers were in a legal strike position.

The union issued a 72-hour strike notice Saturday, which meant their workers would have been in a legal strike position early Tuesday morning.

Details of the agreement are being withheld pending ratification by union members, a process expected to take approximately 60 days.

Heading off a major rail strike is good news for the Canadian economy, said Bob Ballantyne, president of the Freight Management Association of Canada.

Ballantyne had warned that a strike would be damaging to the economies on both sides of the border and cause collateral damage to non-rail workers.

A full work stoppage would have caused plant closures in the $55-billion chemicals and plastics industry.

“In the case of a complete work stoppage, it would shutter most of our businesses within 48 hours maximum,” Bob Masterson, CEO of the Chemistry Industry Association of Canada, said before a deal was reached.

Several large shippers had written to the federal government urging them to work to avoid a work stoppage or be prepared to order striking workers back to the table.