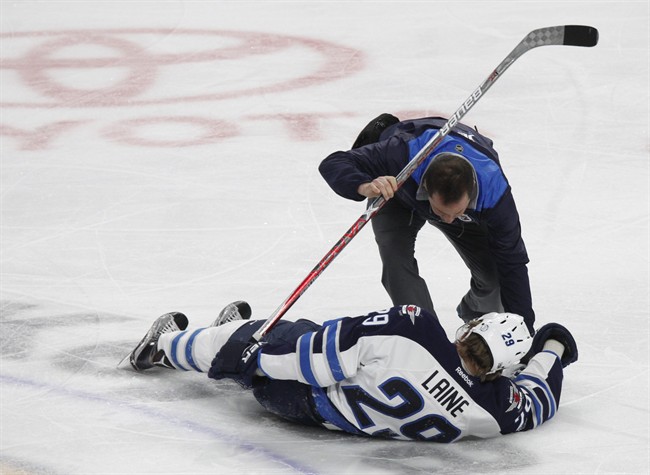 Winnipeg Jets forward Patrik Laine (29) is helped by a trainer after being hit during the third period of an NHL hockey game against the Buffalo Sabres, Saturday, Jan. 7, 2017, in Buffalo, N.Y. Laine was out indefinitely after being diagnosed with a concussion. (THE CANADIAN PRESS/AP/Jeffrey T. Barnes)

WINNIPEG – The Manitoba government is eyeing new rules aimed at detecting and reducing the number of concussions in young athletes.

A bill before the legislature would require all provincial sport organizations and school sports teams to adopt protocols for young athletes who are suspected of sustaining a concussion while playing.

The proposed legislation would require coaches to remove an athlete from play and get medical clearance before allowing the athlete to return to action.

Rochelle Squires, minister for sport, culture and heritage, says there would also be mandatory information or training for coaches and athletes.

Dr. Michael Ellis, head of the concussion program at the PanAm clinic in Winnipeg, says the bill will help raise awareness of how to deal with suspected concussions.

It is expected to become law in the fall.

← Previous: Man Laying in Box of Pickup Truck Run Over in Northern Manitoba Next: Portion of York Avenue to Close on Wednesday →
Tags: Health | Manitoba | Winnipeg