By Peter Cameron, The Canadian Press 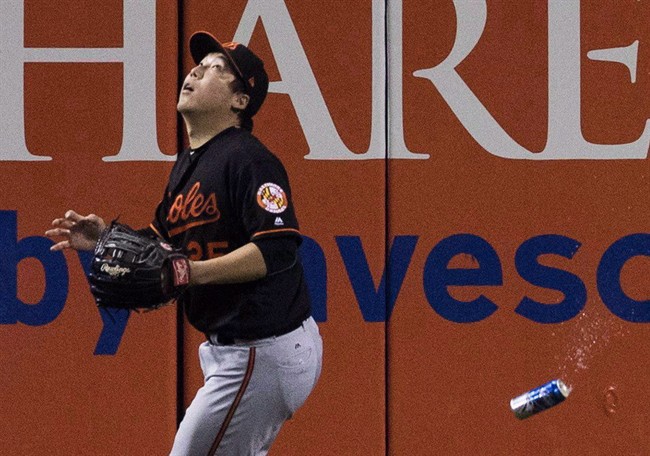 Baltimore Orioles’ Hyun Soo Kim gets under a fly ball as a beer can sails past him during seventh inning American League wild-card game action against the Toronto Blue Jays in Toronto, Tuesday, Oct. 4, 2016. A man accused of tossing a beer can towards a Baltimore outfielder during a Blue Jays playoff game has pleaded guilty to mischief under $5,000. (THE CANADIAN PRESS/Mark Blinch)

TORONTO – A man who tossed a beer can onto the field during a dramatic Blue Jays playoff game last fall has pleaded guilty to mischief in connection with the incident.

In an agreed statement of facts presented in court on Tuesday, Ken Pagan admitted tossing a can of beer on the field as a Balimore Orioles player was about to catch a fly ball during seventh inning of the pivotal wild card game in Toronto.

The can thrown from the stands at the Oct. 4 game just missed outfielder Hyun Soo Kim as he made the catch.

“The can of beer narrowly missed the player and nearly interfered with the play,” the statement said. “It caused a significant disruption in the game and created concerns for player safety.”

The statement gave no indication as to why Pagan threw the can.

Pagan pleaded guilty to mischief under $5,000 and is to return to court on June 28.

After the beer can toss, police and stadium security immediately converged on the stands in an effort to locate the person who threw the can, but were unable to identify a suspect.

The incident triggered a social media frenzy as many analysed photographs and video footage from the game to figure out where the can had come from.

After reviewing video surveillance, television footage of the event, as well as video and photographs taken by the public, Toronto police released an image of a suspect they described as an “unsportsmanlike fan.”

Toronto police Const. Craig Brister said after the release of the suspect photo that security video from the stadium played a key role in the investigation.

“Rogers Centre has a fantastic security camera system,” Brister said, adding police were confident they had identified the right individual.

Pagan confirmed to The Canadian Press at the time that he was the person in the picture distributed by authorities and turned himself in on Oct. 6.

Pagan was an employee at Postmedia Network Inc., and an online profile listed him as a sports copy editor, but a Postmedia spokeswoman said after Pagan was charged that he had left the company.

Georgia Sourtzis did not elaborate on the circumstances of Pagan’s departure, but the company had said earlier that it was conducting an internal investigation following the beer-tossing incident.

The tallboy toss also had repercussions for beer drinkers at Rogers Centre, as the Jays announced they would not serve beer in cans for the rest of the post-season.

The policy change, which saw beer served only in plastic cups, went into effect before Game 3 of Toronto’s American League Division Series against the Texas Rangers on Oct. 9.

Pagan’s defence lawyer Tyler Smith said Tuesday in an email that a pre-sentence report has been ordered for his client’s next appearance in court.