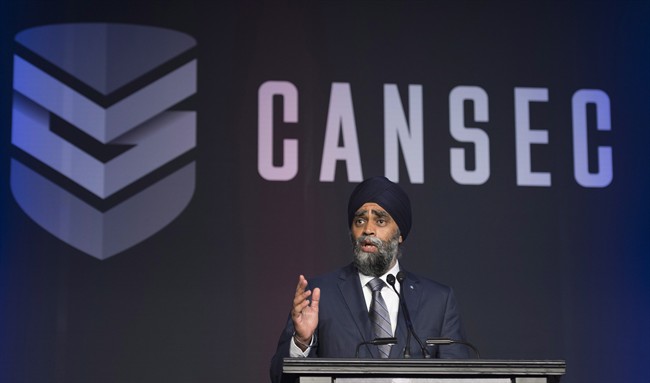 Minister of National Defence Minister Harjit Sajjan speaks at the Canadian Association of Defence and Security conference in Ottawa, Wednesday May 31, 2017. Sajjan used a major speech Wednesday to the defence industry to blast American firm Boeing for picking a trade spat with Bombardier. (THE CANADIAN PRESS/Adrian Wyld)

Sajjan said Canada is disappointed by the “unfounded” action by one of its major partners in the defence industry and he delivered that message to hundreds at a breakfast speech at a major trade show for military contractors.

Boeing has petitioned the U.S. Commerce Department and the U.S. International Trade Commission to investigate subsidies for Bombardier’s CSeries aircraft that it says have allowed the Canadian company to export planes at well below cost.

Sajjan said Boeing is not behaving like a “trusted partner” and the government wants the company to withdraw the complaint.

He repeated the Canadian government’s thinly veiled retaliation threat to scrap the planned purchase of 18 Super Hornet fighter jets from the Boeing.

“A productive relationship between industry and government is crucial,” the minister said.

“We strongly disagree with the decision of the United States Commerce Department to initiate a trade remedy case in response to Boeing’s petition against Bombardier.”

Sajjan also said the defence policy review that he will unveil next week will be linked to the government’s broader innovation agenda.

He said the military wants to help foster a partnership with the defence industry that allows for the development of cutting-edge equipment for Canadian soldiers.

Sajjan also made a pitch for the defence industry to help Canada with its broader agenda with the U.S. — keeping borders open to trade in the face of possible protectionist action by the Donald Trump administration.

“We call on all of our industry partners to speak with one voice about the interconnectedness of the defence industry supply chain between Canada and the United States,” Sajjan said.

“We need your help in making the clear case of ensuring goods continue to flow freely across our two countries. We need your voices to articulate the consequences should our borders be closed. The government will continue to deliver this same message.”