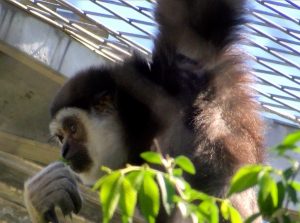 A gibbon has a snack in its enclosure at Assiniboine Park Zoo on Friday, June 2, 2017. (CHRISD.CA)

WINNIPEG — White-handed gibbons are back at Assiniboine Park Zoo in a new exhibit that opened on Friday.

Maya, a six-year-old female, and Samson, a 15-year-old male, are housed in the former lion pavilion after an extensive makeover.

“They live up high in treetops, so you may find them tucked up in a tree. Generally, they’re very active animals.”

Both animals have connections to Winnipeg. Maya was born at the Assiniboine Park Zoo in January 2011. Her parents, Mel and Manju, both lived in Winnipeg before being transferred to Safari Niagara in 2011 when the former monkey house was temporarily re-purposed and eventually decommissioned during construction of the McFeetors Heavy Horse Centre. Samson was born at the Edmonton Valley Zoo in June 2002. His father Chan was born at Assiniboine Park Zoo in 1992 and lived here for two years, before moving to Edmonton.

Gibbons, which are small tailless apes with soft, thick fur, are found mainly in tropical rainforests in Southeast Asia.