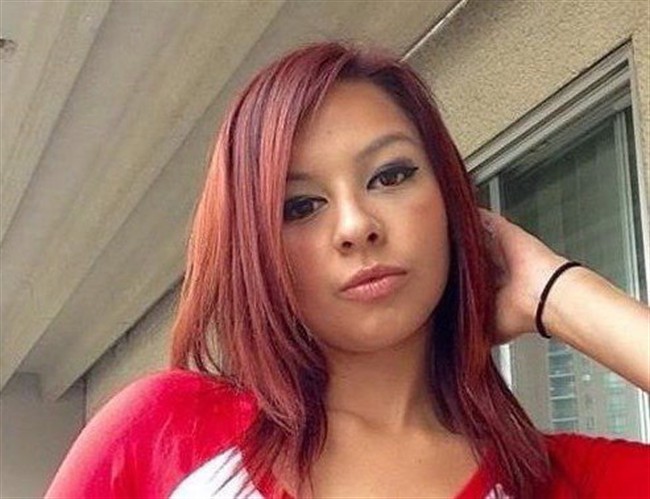 Christine Wood is shown in a Winnipeg Police handout photo. A bail hearing is underway for a man accused of killing Wood, a Manitoba woman whose body was found last week in a farm field after she vanished almost 10 months ago in Winnipeg. (THE CANADIAN PRESS/HO-Winnipeg Police)

WINNIPEG – Four days after the remains of an indigenous woman were found in a farmer’s field outside Winnipeg, the man accused of killing her appeared in court for a bail hearing.

Brett Overby, 30, sat attentively, dressed in a black dress shirt and pants Monday, as the Crown and defence made submissions that cannot be reported under a court-ordered publication ban. He is accused of second-degree murder in the death last August of 21-year-old Christine Wood.

Sitting in court was Bernie Young, who is married to Wood’s aunt.

“It was very hard, very difficult. I had a hard time. Sometimes just listening to what was being said was very difficult to take,” Young said outside court.

“(We were) very close. She used to call me uncle.”

Overby was charged in April after police said they found evidence in his house. Overby and Wood were not previously known to each other, police said.

After the arrest, hundreds of people walked through the streets of Winnipeg in a show of support for Wood’s family and to raise awareness again of the issue of missing and murdered indigenous women.

Her parents, George And Melinda Wood, stopped outside the house where police believe she was murdered and bowed their heads in prayer.

Almost 10 months after Wood’s disappearance, her body was found Thursday in Springfield, Man., by a farmer inspecting his crops. An autopsy the next day confirmed her identity.

Young said he and other relatives had been hanging on to “a glimmer of hope” that Wood would somehow be found alive, but the discovery of the body has brought some closure to the family.

“My wife contacted George and yeah, (he found) a little comfort in hearing that it was finally coming to an end.”

Woods should be remembered as a kind and smart young woman, Young added.

“She was very intelligent and she was always friendly. I think she loved everybody. I think that’s how I’ll always remember her.”