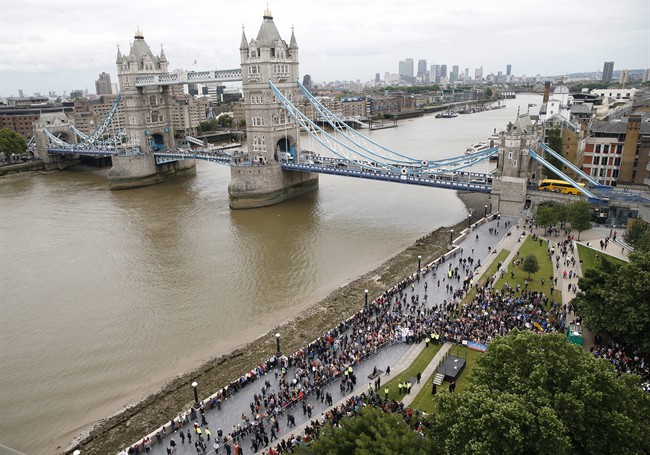 People attend a vigil for victims of Saturday’s attack on London Bridge, at Potter’s Field Park with Tower Bridge in the background in London, Monday, June 5, 2017. Alberta Premier Rachel Notley says the province is shaken by the death of a Canadian woman in a London terror attack on the weekend. (THE CANADIAN PRESS/AP-Alastair Grant)

CALGARY – A Canadian woman killed in a terror attack in London is being remembered for her work with the homeless and her death is inspiring others to give back.

Christine Archibald, 30, was among seven who died in a van-and-knife attack on London Bridge and nearby restaurants on Saturday.

She and her fiance, Tyler Ferguson, were enjoying a warm spring night when she was struck by a speeding van that plowed into people strolling on the bridge. Ferguson’s sister, Cassie Ferguson Rowe, said in a Facebook message that Archibald died in her fiance’s arms.

Archibald’s family, who live in Castlegar, B.C., released a statement Sunday through the Canadian government asking people to honour her memory.

“She had room in her heart for everyone and believed strongly that every person was to be valued and respected,” the statement said.

“Volunteer your time and labour or donate to a homeless shelter. Tell them Chrissy sent you.”

Archibald was working at a shelter before she moved to Europe to be with Ferguson.

Former colleagues at Alpha House, a Calgary not-for-profit that helps people facing addiction, are remembering her as a talented social worker and exceptional human being, said executive director Kathy Christiansen.

“Chrissy was a bright light to many, and her generosity, kind spirit and huge heart for her work in responding to issues of addictions and homelessness at the centre inspired us all.”

On Twitter, people using the hashtag #Chrissysentme said they were inspired by Archibald to help others.

“In darkness we have a choice, to make the world a better place or let hate win,” said one tweet. “Chrissy Archibald’s family chose the former.”

Some pledged to make donations to shelters, soup kitchens and other community groups.

“We have made a donation to our community food bank in honour of Christine Archibald,” said one tweet. “I don’t know what else to say except: #Chrissysentme.”

Calgary writer Mike Morrison tweeted Sunday night that he had made a $100 donation to Alpha House.

“It felt like something that I wanted to do and then also let people know how easy it is, that they could donate and honour Chrissy’s memory,” he said.

Archibald had a great deal of empathy for people in tough situations, said Peter Choate, an assistant professor of social work at Mount Royal University, where she studied.

“She exemplified what matters to us in social work, and that’s the capacity to see the challenging circumstances that someone finds themselves in and be prepared to work with them to cope as best they can with life’s circumstances,” he said.

Diana Krecsy, CEO of the Calgary Homeless Foundation, said the message from Archibald’s grieving family was powerful and she hopes it fosters understanding around homelessness and inspires people to help.

“I’m overwhelmed by a family that could step up and be so courageous and make something good out of something so tragic,” she said.

Krecsy didn’t know Archibald personally, but she knows what it takes to be a front-line worker for the city’s most vulnerable population.

“You have to have a big heart, a lot of courage, a lot of compassion to put your time and efforts into working in this sector,” she said.

Two GoFundMe campaigns have been set up in Archibald’s memory: one by a close friend of her fiance raising funds for the United Way and another by London’s We Care food bank.

Premier Rachel Notley said the London attack hit Alberta especially hard because Archibald was known and loved by so many in the province.

“She could have been any one of us and her tragic death has left our province shaken,” she said in a release Monday.

“Albertans stand united with our friends in London and with everyone across the world who believes in the importance of free, open and caring societies.”

— With files from Steve Hennigar in Toronto