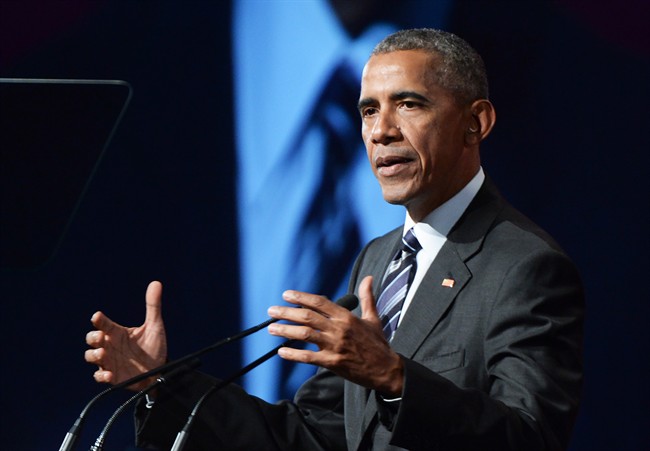 MONTREAL – Former U.S. president Barack Obama has again decried what he calls the lack of American leadership on climate change.

In a speech to the Montreal Board of Trade on Tuesday, Obama did not mention U.S. President Donald Trump by name but clearly targeted his successor’s decision to pull the United States out of the Paris climate change agreement.

“In Paris, we came together around the most ambitious agreement in history to fight climate change,” Obama said. “An agreement that even with the temporary absence of American leadership will still give our children a fighting chance.”

The former president also seemed to take a dig at Trump when he discussed the current age of instant information.

“Where TV and Twitter can feed us a steady stream of bad news and sometimes fake news, it can seem like the international order we have created is constantly being tested and the centre may not hold,” he said.

“And in some cases, that leads people to search for certainty and control and they can call for isolationism or nationalism or they can suggest rolling back the rights of others.

“Or simply they can try to retreat and suggest we have no obligations beyond our borders, or beyond our communities, or beyond our tribe — that what’s good for me and my immediate people is all that matters, that everyone else is on their own.”

Obama said that while such instincts of retrenchment are understandable and tempting, they must be avoided.

“History also shows there is a better way,” he said. “Canada shows, the United States, Europe, Japan show it is possoble for us to overcome our fears and to reach across our divides.”

About 6,000 people, including Premier Philippe Couillard, former premier Jean Charest and a slew of high-profile business executives, attended Obama’s speech in what was his first visit to Canada since he left the White House in January.

People were advised to show up two hours before the speech.