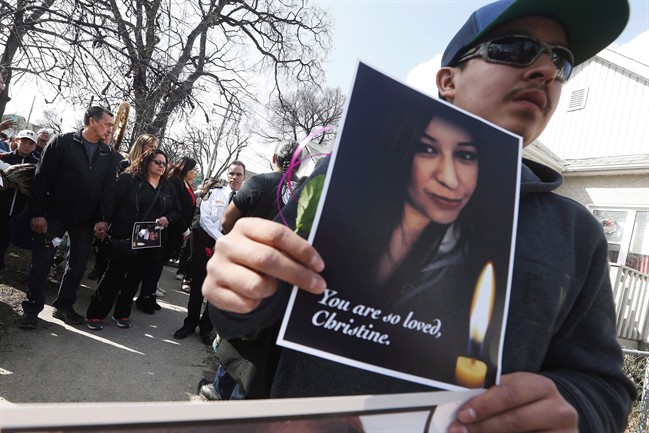 During a march for Christine Wood, Byron Wood holds a photo of his sister as his parents Melinda and George stop outside the house where police believe Wood was killed in Winnipeg on April 12, 2017. Police in Winnipeg say they have located the body of Christine Wood in a farm field east of the city. At a news conference last Saturday, police said the 21-year-old’s body was found Thursday by a local land owner checking his crops. (THE CANADIAN PRESS/John Woods)

WINNIPEG – Relatives and friends of a slain indigenous woman from northern Manitoba held a vigil Tuesday in a field just outside Winnipeg where her body was found.

Christine Wood from the Oxford House First Nation was 21 when she disappeared in August while she and her parents were in the city to help a relative with medical appointments.

Wood’s body was found last week by a farmer inspecting his crops. Brett Overby had been charged in April with second-degree murder in her death.

About 50 people gathered for Tuesday’s vigil, which included a smudging ceremony, prayers and a spiritual song.

Others stood back as her greiving parents made their way to the spot where her body was found.

Wood’s mother knelt on the ground while her husband put his arm on her. They wept together as they silently remembered their daughter.

The couple have said they will not speak to the media, saying it is simply too difficult for them.

Grand Chief Sheila North Wilson, who represents northern Manitoba First Nations, said earlier in the day that the vigil would be painful but was part of the grieving process that many families of missing and murdered indigenous women have never had a chance to go through.

“Having her body located has brought both relief and a great sense of loss,” North Wilson said in a statement.

“This gathering will be held for Christine, her parents, siblings and family in an effort to provide some closure to this unimaginable experience. We stand with them in prayer during this time of grief, and moving forward we will be diligent in the call for justice in her life being taken from her.”

After Overby’s arrest, hundreds of people walked through the streets of Winnipeg in a show of support for Wood’s family and to once again try to raise awareness about missing and murdered indigenous women.

A judge is expected to decide Thursday whether Overby should be granted bail.