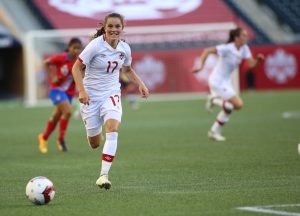 WINNIPEG – Jessie Fleming’s scoring touch is so impressive that it can turn John Herdman, the head coach of Canada’s women’s national team, into just another fan in the crowd.

The 19-year-old London, Ont., native took a lead pass from captain Christine Sinclair and buried the ball in the bottom corner past goalkeeper Noelia Bermudez.

“I was in the stands with the crowd jumping around when Jessie scored,” said Herdman with a smile. “Just such a good goal. She’s got that quality. She’s really got that ability to do that, and I think over the next few years we’ll see more of that from Jessie Fleming because she keeps pushing herself to do it.”

Prior to the game, Fleming was presented with her Canada Soccer U-20 women’s 2016 player of the year award in front of an announced crowd of 14,434 at Investors Group Field that were mostly clad in red and white.

“She’s a world-class player that I believe over the next few years could be the best in the world,” Sinclair added.

Fleming said it was “pretty cool” to hear praise from her coach and captain.

“But I’m also surrounded by those great players that are up and coming,” Fleming said. “I think as a team we complement each other really well right now.”

Sinclair scored on a penalty kick in the 52nd minute for the fifth-ranked Canadians, her 168th career goal. Adriana Leon added the last one in the 90th minute after battling with at least three misses.

Diana Saenz scored for 30th ranked Costa Rica after Winnipeg’s Desiree Scott gave the ball away on a pass attempt in front of Costa Rica’s goal. A visitor’s shot then bounced off the goal post and Saenz scored to make it 2-1 in the 56th minute.

Herdman said he liked his players’ scoring chances and fight, but they “have to be more ruthless.”

The victory upped Canada’s overall record against Costa Rica to 11-0, with the squads meeting again Sunday in Toronto at BMO Field.

Costa Rica didn’t get its first shot on goal until the 27th minute, but it was a long ball by Cristin Granados that ‘keeper Stephanie Labbe caught standing up.