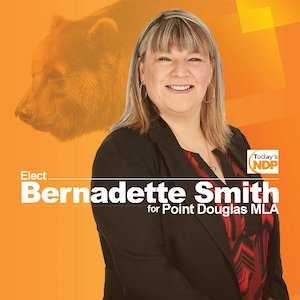 The Tories allege Point Douglas NDP candidate Bernadette Smith has posted photos on Twitter of voters in front of a polling station. (NDP)

The Tories have filed a complaint with the returning office in Point Douglas — a Winnipeg seat where advance polls are underway for a byelection on Tuesday.

The Tories say NDP candidate Bernadette Smith has taken photographs of herself with voters in front of the polling station and posted them on social media.

They also allege NDP legislature members have been spending a lot of time around one polling station and on a balcony that overlooks it.

The province’s Elections Act forbids anyone from trying to influence voters or post campaign material within 50 metres of a polling station.

The Tory complaint says it’s troubling that NDP members appear to be engaging voters so close to advanced polling stations.

“We would ask that when these activities are brought to the attention of the (returning officer), they should cease,” says a letter to the returning officer for the constituency.

A spokesman for the NDP called the complaint an act of desperation without any merit.

“The PC complaint is full of baseless allegations that are intended to smear,” Matt Austman wrote in an email Thursday.

He said the Tories should take a look at their own actions because they have a campaign office very close to one polling station. The Tories said the office is more than the required 50 metres away.

The byelection is being held to replace former New Democrat Kevin Chief, who resigned in January. Point Douglas is a longtime NDP stronghold, and gave the party its highest vote percentage in last year’s general election.