Competition is the main aspect of the 2017 Canada Summer Games, but the musical entertainment lineup is just as important.

With 49 days to go until the “hottest summer in half a century” begins, the Games organizing committee has unveiled the roster of artists set to perform for the thousands in attendance beginning in July.

Big draws such as The Trews, Kardinal Offishall, The Sheepdogs, Serena Ryder and Brett Kissel make up a few of the performers at the Canada Games Festival happening at The Forks.

More than 150 acts will perform over 11 days, with representation from across Canada, including the best in homegrown talent. Manitoba Night will include Royal Canoe, William Prince, Fred Penner, and a special performance by the Crash Test Dummies with the Winnipeg Symphony Orchestra. 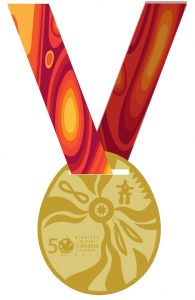 “Excitement continues to build as we get even closer to the opening ceremonies,” Mayor Brian Bowman said. “Winnipeg is thrilled to host coaches, athletes, and spectators from coast to coast to coast, and is ready to show the nation that Winnipeg is one of the hottest places to be this summer.”

Local Metis artist Kenneth Lavallee will have his designs on the distinctive game medals. The hardware will be manufactured by Teck, Canada’s largest diversified resource company. Approximately 1,800 medals will be presented between July 28 and August 13 to successful competitors during the 2017 Games.