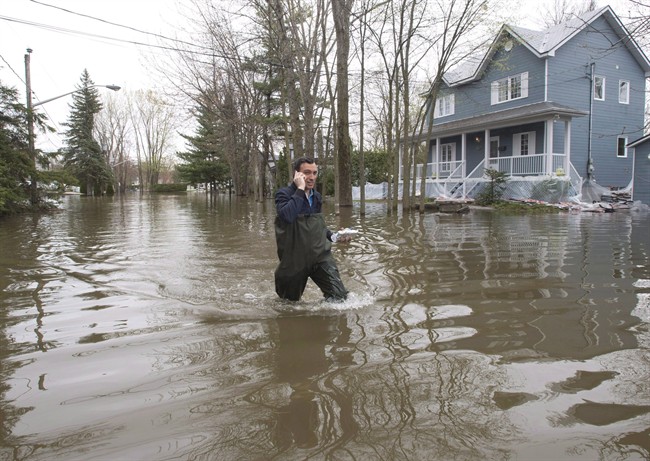 A man makes his way through the flooded streets in Laval, Que., on Wednesday, May 10, 2017. Even as swollen rivers have receded in Quebec, some experts suggest historic flooding this year could mean critter and pest-related woes in months and years to come. (THE CANADIAN PRESS/Ryan Remiorz)

MONTREAL – Even as swollen rivers have receded in Quebec, some experts suggest historic flooding this year could mean critter and pest-related woes in months and years to come.

For now, heavy water accumulation has created standing pools of water which could translate into fertile ground for mosquito populations this year.

“I do expect several times the usual number of mosquitoes,” said Paul Maloney, an entomologist based in western Montreal, part of which was hit hard this spring.

Maloney says one reason for a potential bumper crop is that ponds have remained full after a combination of saturated soil and repeated rainfalls.

Those higher water levels also mean banks of dormant eggs from previous years, untouched during drier springs, are also expected to hatch, with the larvae surviving to adulthood.

Maloney said some of those eggs could be seven or eight years old and just waiting for the right conditions.

In addition to mosquitoes, homeowners could be grappling with a host of other critter-related problems, says Martin Hardy, an entomologist with pest management firm Orkin Canada.

At the peak of the flooding, more than 5,700 homes were hit and more than 4,000 people forced out between early April and mid-May.

Flooded homes face potential mould problems, which, aside from the human health impact, bring their own set of parasites like flies, Hardy said.

Hardy said carpenter ants are a lasting legacy in Montreal-area communities along the Richelieu River and Lake Champlain that were struck by floods in 2011.

“In Quebec, carpenter ants are extremely present,” said Hardy. “Even in urban areas, we see them a lot, it’s not just a rural phenomenon.

“Unfortunately a problem like that can persist for years. The cold weather is not enough to have it go away.”

Cracks in home foundations that aren’t quickly repaired provide an opening for smaller rodents as cold weather sets in.

“It’s pretty much the same issues (elsewhere) — the only thing that’s different is the types of species we’re talking about,” Hardy said, adding other parasites are well-established across the country.

Hardy says dealing with pests remains the same: cleaning up properties, getting rid of stagnant water, fixing foundations and taking care to dry out parts of the home exposed to water and replacing any wood exposed to water.

Scott Pemberton, naturalist at the Morgan Arboretum, said part of the solution is increasing awareness about the different species and how to deal with them.

“In a year where we had a ton of snow and lots of rain, you may want to spend a bit more time than usual on spring cleaning,” Pemberton said.

“It starts with something small that can definitely get out of hand.”