Byelection This Week May Indicate Whether Manitoba NDP Can Rebound 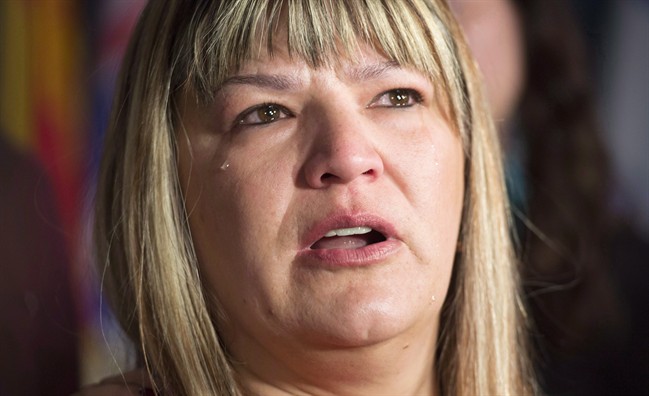 A tear rolls down the cheek of Bernadette Smith, from Winnipeg as she talks about the Missing and Murdered Indigenous Women inquiry on Parliament Hill in Ottawaw on December 8, 2015. A byelection in Manitoba this week is being closely watched to see if the provincial New Democrats have started to rebound following last year’s electoral defeat or whether the now-opposition party has further to fall. The NDP have put forward Bernadette Smith, a teacher and activist with long ties to the area and who co-founded the Coalition of Families of Missing and Murdered Women in Manitoba. (THE CANADIAN PRESS/Adrian Wyld)

WINNIPEG – A byelection in Manitoba this week is being closely watched to see if the provincial New Democrats have started to rebound following last year’s electoral defeat or whether the now-opposition party has further to fall.

Tuesday’s vote is being held in the Point Douglas constituency in Winnipeg’s inner city. It is arguably the NDP’s safest seat — voters have never elected anyone other than a New Democrat and never given a NDP candidate less than 52 per cent support.

A win by any other party would be a huge upset, said Paul Thomas, professor emeritus of political studies at the University of Manitoba. Even a narrow NDP win could indicate trouble for the party.

“It’s about winning with a big margin and showing people that they’re making a political comeback from their humiliating defeat in 2016 and their leadership fights of the past,” Thomas said.

The NDP held power in Manitoba for 17 years before being reduced to official Opposition with 14 of the 57 legislature seats in last year’s election. The loss followed a 2013 decision to raise the provincial sales tax and an attempted coup by five cabinet ministers who called on then-premier Greg Selinger to resign.

Even with the party in disarray, Kevin Chief was easily re-elected to the Point Douglas seat last year with 57.5 per cent of the vote — the highest among NDP candidates. He resigned in January to pursue a private-sector career.

Adding to the drama this time around is that the Progressive Conservatives and Liberals are putting on a full-court press in the belief that the seat may be winnable. They point to NDP seats once thought impenetrable that fell in last year’s election — Thompson, Kildonan and Brandon East.

Liberal John Cacayuran, a former staffer with a federal member of Parliament, was nominated a few weeks after Chief vacated the seat and has been visible in the community attending debates and knocking on doors.

A win for the Liberals would given them a fourth legislature seat — enough for official party status and the funding and profile that come with that.

The Tories, who ran a low-profile candidate from Brandon in Point Douglas last year, have nominated electrician, business owner and former Winnipeg Chamber of Commerce chairperson Jodi Moskal this time.

Moskal has been knocking on doors along with a sizable army of volunteers and politicians from the governing party.

Thomas said the Tories could improve on the 16 per cent of votes they received in Point Douglas in the last general election.

“For them, that would be a victory.”

Moskal and Cacayuran said despite the constituency’s strong NDP history, voters are in the mood for change to help address social and economic issues that remained while the New Democrats were in power.

The NDP have put forward Bernadette Smith, a teacher and activist with long ties to the area and who co-founded the Coalition of Families of Missing and Murdered Women in Manitoba. She was immediately endorsed by Wab Kinew, the only candidate so far in the NDP leadership race, and has had strong support from other caucus members.

The Green Party, Manitoba Party and the Communist Party are also running candidates, although the parties have never been much of a factor in Point Douglas.

The Progressive Conservatives currently hold 40 legislature seats. The NDP has 12, the Liberals have three and there is one Independent.

← Previous: Winnipeg Woman Killed in Single-Vehicle Crash on Highway 15 Next: Push is On to Ban Smoking on All Winnipeg Patios →
Tags: Manitoba | NDP | Winnipeg