By John Cotter, The Canadian Press 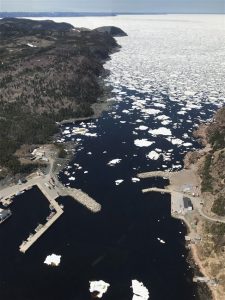 The port of La Scie, N.L. is shown in a handout photo taken from the CCGS Amundsen helicopter on June 8, 2017. An Arctic climate change study has been cancelled because warming temperatures have filled the sea off northern Newfoundland with hazardous ice. (THE CANADIAN PRESS/HO-David Barber)

An Arctic climate change study has been cancelled because warming temperatures have filled the sea off northern Newfoundland with hazardous ice up to eight metres thick.

Instead of cruising north with a team of scientists, the Canadian Coast Guard icebreaker Amundsen has been busy freeing fishing boats and helping other ships surrounded in ice that usually doesn’t travel so far south at this time of year.

“I have been in the Arctic for 35 years and this is one of the most incredible experiences I have ever had,” he said Monday.

“Normally these conditions aren’t so bad. This is climate change fully in action — affecting our ability to make use of marine resources and transport things.”

Barber said warming temperatures have made the ice in the high Arctic thinner. When buffeted by storms and high winds, the ice can move much more freely and travels south on ocean currents.

The expedition of 40 scientists was planning to travel to Hudson Bay, but the Amundsen had to be diverted to help ships caught in the Strait of Belle Isle and along the coast of Newfoundland.

At times, the ice was so thick the ship had to repeatedly back up and ram its way through the frozen barrier.

“Typically we run into this when we overwinter in the High Arctic,” he said. “To be doing that off the Newfoundland coast in June was completely unheard of.”

Barber said the delay caused by the ice prompted the cancellation of the expedition, but scientists put the time to good use. They will share information about the ice conditions with the Coast Guard and shipping companies.

The Coast Guard said last week that some fishing boats that had been stuck in thick ice had returned safely to shore. Five fishermen were flown to safety by a military helicopter after their boat started to take on water.

Scientists said the ice conditions are another indicator that climate change is not something that is going to happen — it is already here.

Barber said the shifting of thick ice will have implications for ship movements in other areas of the Arctic, including Baffin Bay and parts of the Northwest Passage.

He suggested the federal government needs to be more prepared for the changes through better monitoring of ice conditions and ensuring that Canada’s fleet of aging heavy icebreakers is up to the task.

“It was a real eye-opener for me — just how unprepared we are for climate change when it comes to ice hazards,” he said.

“This is a wake-up call for all of us in the country.”