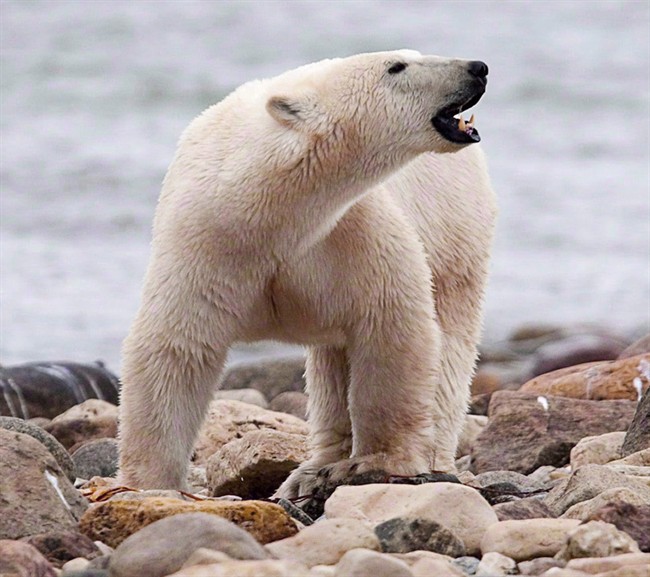 A male polar bear walks along the shore of Hudson Bay near Churchill, Man. on Aug. 23, 2010. (THE CANADIAN PRESS/Sean Kilpatrick)

CHURCHILL, Man. – Business owners and residents of an isolated Manitoba community with some of the Canada’s most prestigious tourist attractions say help is needed following news that their only land link may be cut off until the winter.

Omnitrax, the owners of the Hudson Bay Railway line to Churchill, said Friday that flooding damage to the track is so severe that service is suspended until at least the winter and possibly next spring.

“The whole town is very stressed, very depressed,” said one hospitality worker in Churchill who wouldn’t give her name.

“The government needs to step in.”

Churchill’s attractions play a big role in luring potential visitors to Manitoba. The first image on Travel Manitoba’s web page is a sea kayaker paddling among a pod of beluga whales on Hudson Bay, and people pay thousands of dollars to get up-close views of polar bears at various times of the year.

In 2010, household style maven Martha Stewart visited Churchill and tweeted pictures of her up-close view of a polar bear when she visited the town.

“Believe it or not, northern Manitoba and Churchill are exotic locales for people from all over the world,” said John Gunter of Frontiers North Adventures.

Frontiers North provides package tours and takes travellers to see polar bears in bus-like tundra buggies. A tour group was planning to arrive by train in the autumn, Gunter said, and he’s been scrambling to make arrangements for them to fly instead.

Gunter said he’s also having to make alternate arrangements for vehicles, construction materials and other supplies that are too large to come by plane. They’ll now arrive by barge from Montreal, he said, but at much greater expense.

Prices for food that restaurants in Churchill serve to visitors is also expected to rise, due to the extra cost of flying it in.

A head of broccoli in Churchill already costs $8.75.

Thuraya Weedon of Churchill Nature Tours said air fare is part of the full-service package tours she offers, but notes she’ll be paying more to feed her guests.

It’s a cost she says she’ll just have to eat. But she said other businesses in Churchill have it worse.

“All their guests who come off the train, well, they’ve all cancelled. So their loss is greater than the pittance that I have to pay extra,” Weedon said.

Olivia Billson, a spokeswoman for Infrastructure Minister Blaine Pedersen, said Friday the province has been advised an airline will provide twice-a-week service to Churchill and that the province “will take further steps as warranted to ensure the safety and well-being of all Manitobans.”

Churchill Mayor Mike Spence has called for both the provincial and federal government to pay for the difference for freight.

Gunter said the train trip to Churchill across prairies, boreal forest and tundra is part of the adventure for many visitors, and that polar bears are among the top things people think about when they think of Canada.

Omnitrax also announced last year it was suspending operations at the grain terminal at the Port of Churchill, then scaled back freight service on the rail line. The Denver-based company has been trying to sell the port and rail line to a First Nations consortium.

“We’ve heard nothing and I think it’s that lack of communication and that vacuum of information, that has been really stressful for everybody involved,” Gunter said.

“So, say yes, or say no. Say something so we can make our own plans if we have to.”

← Previous: Push is On to Ban Smoking on All Winnipeg Patios Next: Jets Open Pre-Season at Home Against Minnesota Wild →
Tags: Animals | Manitoba