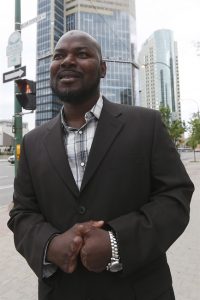 Razak Iyal, one of two asylum seekers who walked across the Canada/US border in December and lost his fingers and toes because of severe frostbite, is photographed as he enters his refugee hearing in Winnipeg, Tuesday, June 13, 2017. (THE CANADIAN PRESS/John Woods)

WINNIPEG – More than five months after he almost froze to death walking across the Canada-United States border, eventually losing his fingers to frostbite, Razak Iyal was granted refugee status Tuesday.

“If I go back to Ghana, I might lose all my life. But here I am, I just lost my fingers, but I’m still part of the society,” Iyal, 35, said after his closed-door Immigration and Refugee board hearing.

“I thank God that I’ve been accepted to stay in Canada, to be a Canadian. And what I have in me, I’ll make sure I share it with the community, with the people.”

Iyal was among the first in the recent wave of refugee-claimants sneaking across the border from the United States out of fear of being deported back to their home country.

After meeting up with another man from Ghana, Seidu Mohammed, at a bus station in Minneapolis, the two men took a bus to Grand Forks, N.D., and then a taxi to an area near the border.

It was Christmas Eve and the overnight windchill dipped to —30 C as the men walked though snowy fields in the darkness for hours. They were not dressed for such an excursion, and suffered severe frostbite before being noticed by a trucker after crossing into Canada.

They would spend weeks recovering in hospital. Iyal lost all his fingers but kept his thumbs. Mohammed lost all ten digits.

“I can do a lot of things that people who have fingers can do,” said Iyal, who dreams of bringing his wife to Canada and opening an electronics business similar to one he had in Ghana.

Iyal said he fled Ghana because his five siblings were out to kill him in a dispute over the inheritance of his late father’s property. A local politician was involved, he said.

After he arrived in Canada, some media reports in Ghana said he was a homosexual. It’s not true, he said, but the reports added to the danger he would face if returned home due to the African nation’s treatment of gays and lesbians.

“There is no place in Ghana, which is geographically a very small country, that he could ever be safe,” his lawyer, Bashir Khan, told reporters.

Iyal and Mohammed both had their claims for asylum rejected in the United States, so they would have been turned back at an official border crossing under the Canada-U.S. Safe Third Country Agreement.

Like hundreds of others in recent months, they opted to try to sneak across the border, knowing that they would get a refugee hearing if they made it on to Canadian soil before turning themselves in.

Mohammed, who is bisexual and a professional soccer player, had his refugee claim approved last month.