By Craig Wong, The Canadian Press 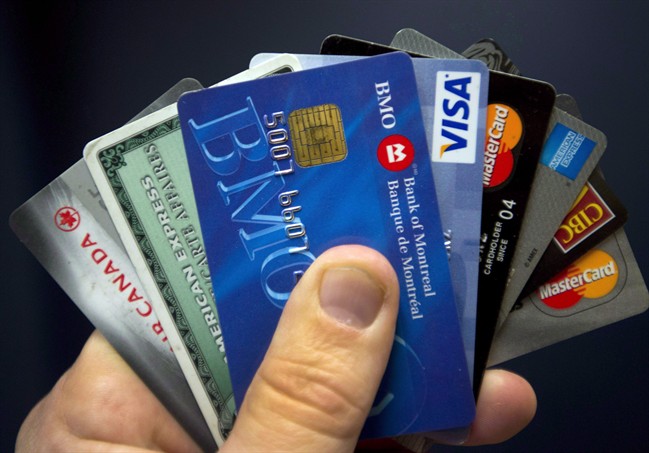 Credit cards are displayed in Montreal in a Wednesday, December 12, 2012 file photo. The amount Canadians owe compared with their income ticked lower in the first quarter but remained near record levels as mortgage debt continued to climb. (THE CANADIAN PRESS/Ryan Remiorz)

OTTAWA – The amount Canadians owe compared with their income ticked lower in the first quarter but remained near record levels as mortgage debt continued to climb.

That means that for every dollar of disposable income, Canadians owe about $1.67.

Economists and policy-makers, including the Bank of Canada, have raised concerns about household debt and see it as a key risk to the economy.

Low interest rates have fuelled the growth in household debt in recent years, but the central bank has started dropping hints that may be changing as the economy has improved.

Canadians should be thinking about what their finances would look like were interest rates to rise, Bank of Canada governor Stephen Poloz said this week.

Royal Bank economist Laura Cooper said the cost of servicing debt has remained broadly unchanged in recent years, but households’ sensitivity to rate hikes is likely greater now than when rates have risen in the past.

Total debt, which includes consumer credit, and mortgage and non-mortgage loans, totalled $2.041 trillion in the first quarter. Mortgage debt represented 65.7 per cent of that, up from 65.6 per cent during the last three months of last year.

“While indebtedness has recently stabilized for Canada as a whole, it still remains elevated, leaving households particularly sensitive to rising rates,” TD Bank economist Diana Petramala said in a note to clients. “Moreover, averages do not tell the full story, with risks still rising in Ontario.”

Household net worth at market value rose 2.2 per cent to nearly $10.534 trillion. Households borrowed $27.5 billion on a seasonally adjusted basis in the first quarter, down slightly from $27.6 billion in the previous quarter.

Mortgage borrowing increased $2.7 billion from the fourth quarter to $20.9 billion, while demand for consumer credit and non-mortgage loans fell $2.8 billion to $6.5 billion.

Statistic Canada’s report came as the Teranet–National Bank national composite house price index, which measures homes sold at least twice in their history, hit a new all-time high for a 16th consecutive month. The index gained 2.2 per cent last month, the largest gain for May in the 19-year history of the index.