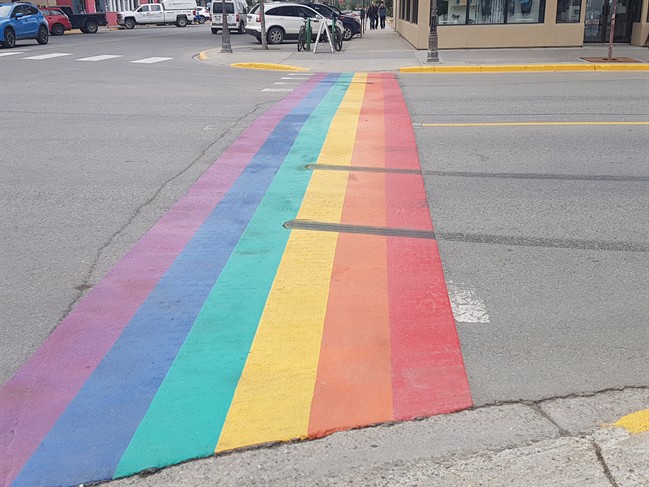 Tire burnout marks are seen on a crosswalk painted with the colours of the rainbow in honour of the LGBTQ community, on Tuesday, June 13, 2017, in Whitehorse, Yukon Territory. Witnesses say a white truck stopped on the crosswalk on Monday and burned rubber, leaving long black marks across the rainbow. (THE CANADIAN PRESS/HO-CKRW, Tim Kucharuk)

WHITEHORSE – RCMP in Whitehorse have opened an investigation into an act of vandalism on a newly painted rainbow crosswalk installed by the city in support of the LGBTQ community.

Witnesses say a white truck stopped on the crosswalk on Monday and burned rubber, leaving long black marks across the rainbow.

Whitehorse Mayor Dan Curtis says he’s embarrassed for the person who did the burnout, adding there will always be a small portion of the community that is intolerant and fearful of others.

Curtis says he’s actually glad it happened because it emphasizes the need for tolerance and the obvious point that more work has to be done in the community.

Chase Blodgett, the founder of All Genders Yukon, says the incident highlights what those who live on the gender or sexual orientation diversity spectrum have to deal with in their lives.

The rainbow crosswalk was painted just a few weeks ago across the city’s Main Street in what Curtis said was a celebration of diversity and an act of inclusion for all citizens. (CKRW)