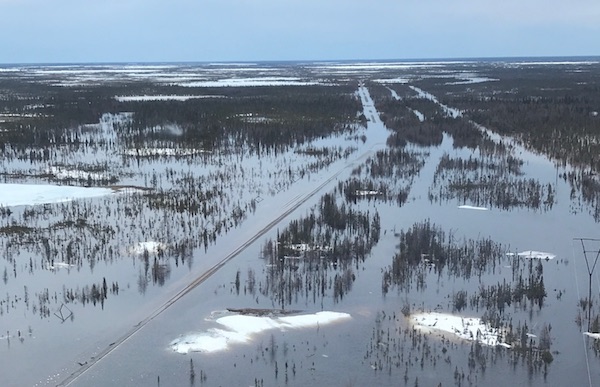 The flooded-out Hudson Bay Railway is a lifeline for Churchill, Manitoba. (OMNITRAX / HANDOUT)

WINNIPEG – People in sub-arctic Churchill, Man., face the prospect of running out of heating fuel over the winter unless the region’s rail line is repaired and service is restored, Mayor Mike Spence said Wednesday.

Spence met with federal and provincial politicians in Winnipeg and tried to persuade them to help the rail line’s owner speed up plans to repair damage from extensive flooding this spring.

Denver-based Omnitrax has said it will be next spring before the many sections of washed-out track and damaged bridges can be assessed and fixed.

“We need to deal with this right now. We can’t have a spring deadline,” Spence said.

“Not having propane in the community — Manitoba housing units, private homes, private businesses, right? You run out of heat, you’re done.”

The rail line is the only land link to the remote town of 900 on the western shore of Hudson Bay — a popular tourist destination for watching polar bears and beluga whales. Trains bring in food, fuel and other supplies, some of which are now being flown in at much higher cost.

Fuel, heavy equipment and other goods can be brought in by ship, but the ice-free season is short and the winters are cold and long. The town does not have enough propane storage facilities to last an entire winter, Spence said.

Omnitrax has said it has hired an engineering company that will take four weeks to assess the damage and list necessary repairs.

The mayor wants the federal and provincial governments to put “boots on the ground” in the form of inspectors to help Omnitrax get a quicker assessment. He also wants government subsidies to cover the higher costs of shipping goods by air.

Spence said he was encouraged after the meetings that included a chat with Manitoba Premier Brian Pallister.

“What I took away from it was that there’s an opportunity here for collectively working together and seeing some positive results.”

Pallister, who spoke to reporters before the meeting, said he is willing to consider subsidies and perhaps some help for repair work, but added he is not ready to make any specific commitments.

“You don’t agree to a subsidy until you know what the subsidy is for,” Pallister said.

A preliminary assessment has shown that flooding washed away the track bed in 19 places and damaged at least five bridges. Omnitrax has said another 30 bridges and 600 culverts need to be examined further.