Woman Scares Off Creep in University of Winnipeg Washroom 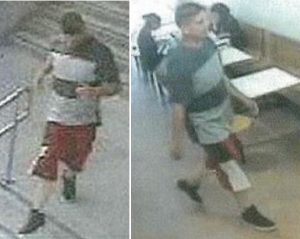 Police are looking for this man, who they say walked into a women’s washroom at the University of Winnipeg on Tuesday and looked underneath a stall door. (WPS / HANDOUT)

A woman’s scream was enough to scare off a man lurking inside a University of Winnipeg washroom on Tuesday morning.

A female staff member entered the washroom at around 8 a.m. when she heard someone else enter shortly after. She then saw a man crawling on the floor looking under the stall doors before standing up and looking through a gap in the door of her stall.

The woman yelled and the man fled.

Anyone with information is asked to contact Winnipeg police.