Aerialist Daredevil Hangs by Teeth from Chopper Over Niagara Falls 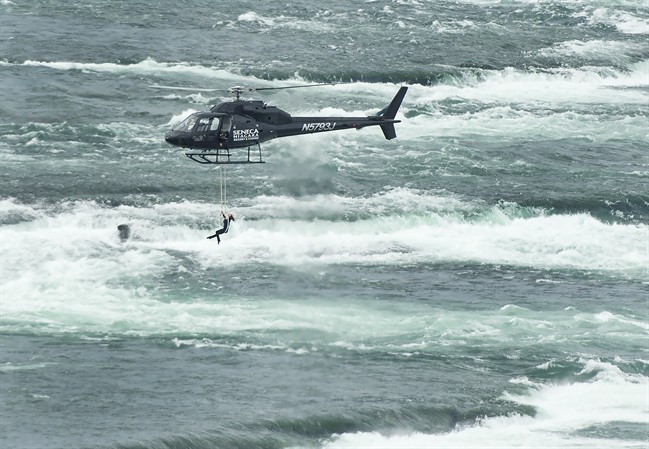 Erendria Wallenda dangles from a helicopter performing a stunt over the Niagara Falls in Niagara Falls, Ont., on Thursday, June 15, 2017. Wallenda performed a series of movements while on a hoop suspended from the helicopter, including hanging from her teeth, her toes and her knees. (THE CANADIAN PRESS/Nathan Denette)

NIAGARA FALLS, N.Y. – A trapeze artist from a renowned family of daredevils hung by her teeth Thursday as a helicopter carried her above the thunder of Niagara Falls in a stunt that grabbed international attention.

As people on both sides of the Canada-U.S. border craned their necks to catch a glimpse, aerialist Erendira Vasquez Wallenda performed a series of movements on a hoop suspended from the chopper, including hanging from her knees and toes — and twice from her teeth.

“There are no words; it was beautiful,” Wallenda said moments after returning to the ground. “It felt amazing.”

Wallenda, 36, performed her feat five years after her stuntman husband, Nik Wallenda, walked 550 metres on a tightrope from the American side of the falls to the Canadian side.

Tethered to a safety harness as legally required, Erendira Vasquez Wallenda said the wind above the falls was far more fierce than she had expected, prompting the pilot to nose the chopper a little higher.

As someone who has performed since she was five years old, she said she wasn’t nervous.

“I know my limits. I would never do anything — I know this sounds silly — that I know would possibly hurt me.”

Wallenda said she hoped her performance would inspire others — and she offered a special message for other females.

Wallenda spent about eight minutes of her 10-minute stunt hovering over the falls. While the plan was to hang from her teeth only once for about 15 seconds, she said she felt so good that she opted to repeat the move for about 10 seconds.

The falls, a site that has attracted and inspired daredevils for generations, has a certain mystical pull, Wallenda said after her performance. Watching her husband five years ago made her want to do something as well.

“As an artist and a daredevil I guess, there is something abut it, something almost magical that draws you to it,” she said.

Some observers who watched Wallenda’s stunt from the ground called it an exciting event.

“It was pretty impressive,” said Marty Newcomen, who was visiting the area from Calgary and watched the stunt from the Canadian side of the falls. “You could see she was making a few moves up there, definitely, changing positions, going horizontal, putting her legs out.”

Janet Dooley, a tourist from California, added that a stunt like Wallenda’s would make for “a nice yearly event.”

Nik Wallenda said his dream was to open a permanent family-friendly facility on the U.S. side of the falls where people could learn to perform stunts in safety.

In the interim, he said, he hoped more people would come visit the area as a result of the publicity afforded his wife’s stunt.

“The global attention is huge. It’s like a worldwide TV commercial.”