Manitoba, Saskatchewan Could Lose Millions from Ottawa’s $2B Carbon Fund 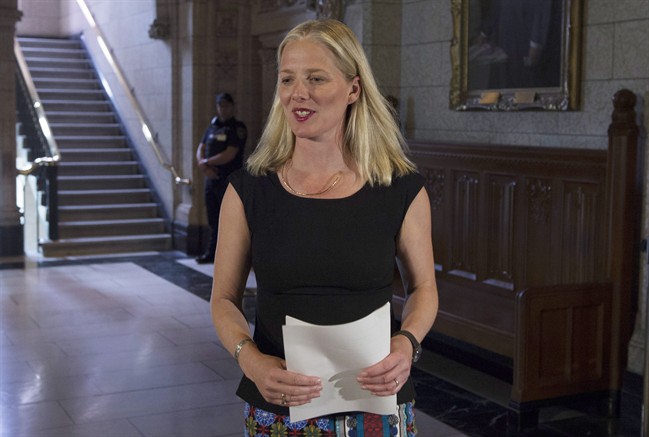 Minister of Environment and Climate Change Catherine McKenna walks to a news conference in the Foyer of the House of Commons in Ottawa, Thursday June 15, 2017. (THE CANADIAN PRESS/Adrian Wyld)

OTTAWA – Manitoba and Saskatchewan have been given until the end of December to sign on to the federal government’s national climate change agreement to avoid losing out on millions of dollars to help cut emissions.

The first is a $600-million Low Carbon Economy Challenge for industry and public sector projects, to be launched this fall and doled out on a merit-based, project-by-project basis. Municipalities, provinces, territories, indigenous governments and organizations, businesses and not-for-profit organizations can all apply for funds, which will be prioritized for projects that provide the biggest emissions reductions for the lowest cost.

The second is a $1.4-billion Low Carbon Economy Leadership Fund per capita fund for provinces and territories that have signed on to the Pan Canadian Framework on Clean Growth and Climate Change.

Each eligible province will receive a base of $30 million plus a per-capita share of up to $1 billion.

Manitoba and Saskatchewan, the only two provinces that have not signed on, have been told they will only get their share of the funding if they sign up by the end of the year.

McKenna said “it’s only fair” that the provinces that stepped up to help Canada meet its international commitments to reduce emissions get to share in the fund.

“We’re certainly working very hard with Saskatchewan and Manitoba and are very hopeful that they’ll sign up to the pan-Canadian plan on climate change,” McKenna said.

“But let’s be clear, all provinces and territories agreed in the Vancouver declaration with the prime minister that we needed to have a credible plan with serious actions that would meet our international obligations.

“The pan-Canadian framework on climate change represents that plan and we will be supporting provinces and territories that have signed up for the plan.”

“Withholding funds from provinces that don’t go along with the federal government’s policies represents a new low in Canadian federalism,” Wall said in a Facebook post.

“Justin Trudeau promised a new era of co-operative federalism. This is new, all right. It is, by an order of magnitude, more punitive, petty and heavy-handed than anything Stephen Harper ever did.”

Wall has already threatened to sue Ottawa if it imposes a carbon tax on his province, as it has promised to do by spring 2018 if Saskatchewan doesn’t put a plan in place. All the provinces on board with the framework have agreed to impose a carbon price of $10 per tonne by 2018, rising to $50 per tonne by 2022.

The low carbon fund was first created in the 2016 federal budget to help provinces fund initiatives to significantly cut greenhouse gases, part of Canada’s race to meet its targets under the Paris climate change accord.

Canada must cut almost 200 million tonnes of emissions by 2030 to meet its target of reducing greenhouse gases to 30 per cent below 2005 levels — equivalent to taking more than twice as many cars off Canada’s roads as are even in the country.

Ontario’s environment and climate change ministry issued a statement Thursday cheering the measure and touting its own work to date on the file.

“Ontario’s climate action efforts support this federal framework, allowing us to achieve real emissions reductions at the lowest possible cost for people and the economy,” the statement said.

“We see this as an opportunity to form partnerships, and to further deliver on our commitment to reduce greenhouse gas emissions and help Canada meet its commitments under the Paris agreement.”

The federal government wants the money spent on projects that significantly reduce emissions, prioritizing those that are most cost-effective. Initiatives must also be in addition to existing projects or those that are already planned.