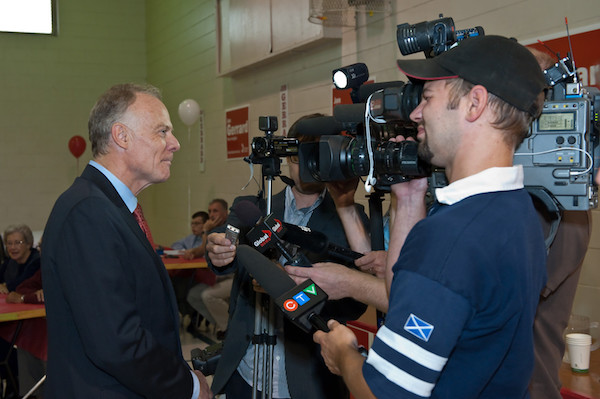 WINNIPEG – Six years after resigning the Manitoba Liberal leadership amid pressure from party members, Jon Gerrard is trying to get his old job back.

Gerrard has told a crowd of supporters that people have been calling on him to run again.

Gerrard’s two caucus colleagues — Cindy Lamoureux and Judy Klassen — are also running, as is Dougald Lamont, a small business owner and university lecturer who finished a distant second in the last leadership race.

Gerrard, who is 69, served one term as a member of Parliament in the 1990s and took over the helm of the Manitoba Liberals in 1998.

In the four elections under his watch, the Liberals saw their share of the popular vote drop each time and never captured more than two legislature seats.

The Liberals are to choose a new leader on Oct. 21.

Gerrard was pressured to resign as leader after the 2011 election, in which he won the party’s only seat and the Liberals captured 7.5 per cent of the vote.

His successor, Rana Bokhari, was riding high in opinion polls going into the 2016 election, but stepped down after the party won three seats and 15 per cent of the vote.

Royce Koop, who teaches political studies at the University of Manitoba, said Gerrard has a built-in support base and is knowledgeable about policy, but his track record will have some members looking elsewhere.

“His weakness in the campaign is going to be that he has to defend this record in the past, which is not stellar,” Koop said.

“There’s a real doubt as to whether he could take the party all the way, even to be official Opposition.”

Now that all three Liberal caucus members are running for leader, the Liberals have to choose an interim boss to represent the party until the October convention. Klassen was filling that role but stepped down from it earlier this week.

The Liberals’ three legislature seats compares with 40 for the Progressive Conservative government and 13 for the New Democrats. There is one Independent.

← Previous: CBC Will Launch Revamped Version of 'The National' on Oct. 30 Next: Construction to Begin on Two New Schools in Winkler and Niverville →
Tags: Jon Gerrard | Liberal Party | Manitoba | Winnipeg