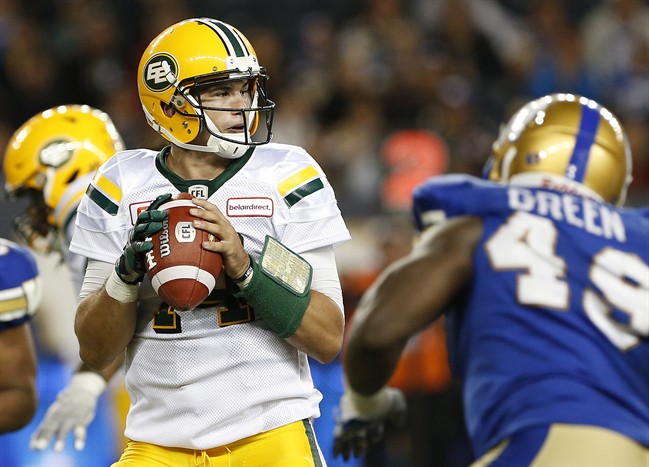 WINNIPEG – A tie is usually nothing to cheer about, but the Winnipeg Blue Bombers and Edmonton Eskimos saw the positives after they played to a 38-38 finish in their final pre-season game Thursday.

In Winnipeg’s first pre-season game against the Saskatchewan Roughriders on June 10, the game ended in a 25-25 tie. No overtime is played in the CFL pre-season.

“Both ties, I’ve never experienced that before,” Bombers backup quarterback Dominique Davis said. “I didn’t even know you can end in a tie in pre-season.

“So two ties, we really don’t celebrate ties around here, but it’s a lot of good things we can look back on.”

Edmonton backup QB Zach Kline connected with John Harris for a 22-yard touchdown and Marion Grice had a two-point convert with nine seconds remaining to knot the score.

The Eskimos’ first pre-season game on June 11 was a 36-35 loss to Calgary after a failed two-point convert.

“Loved the fight, loved the character our club showed in both games, in particular this one at the end,” Edmonton head coach Jason Maas said. “So I’m real excited about the upcoming year because of those.”

That’s when Davis and his backup counterpart Dan LeFevour both scored on touchdown runs.

Davis engineered a four-play, 102-yard drive, capping it off with a seven-yard TD run at 14:37 of the third quarter. The score gave Winnipeg its first lead of the game, a 24-17 edge in front of 24,934 fans at Investors Group Field.

LeFevour started the fourth and got help from an Edmonton pass-interference call that moved the ball 38 yards to the Eskimos’ three-yard line. LeFevour then ran the three yards for the major at 1:30 and 31-17 lead.

Edmonton running back Marion Grice would make it 31-23 after a two-yard run and a missed convert by Sean Whyte, but Bombers running back Timothy Flanders busted loose for a 46-yard TD run at 9:48 for the 38-23 lead.

Grice scored his second TD of the game with 59 seconds left on a one-yard plunge to close the gap 38-30 with a good Whyte convert.

After Kline hit Harris with a 22-yard TD pass, the two-point convert pass was incomplete. However, a Winnipeg penalty gave the Esks another crack and Grice ran in one yard to knot the score.

“It was great. It was awesome. It was definitely a moment I’ll forget,” Kline said of putting together the tying drive.

Bombers backup kicker Felix Mernard-Brier connected on a 32-yard field goal, went wide on attempts from 49 and 45 yards out, and was good on five converts.

Edmonton also got touchdowns from receiver D’haquille Williams and running back LaDarius Perkins. Whyte booted a 14-yard field goal and was good on three converts.