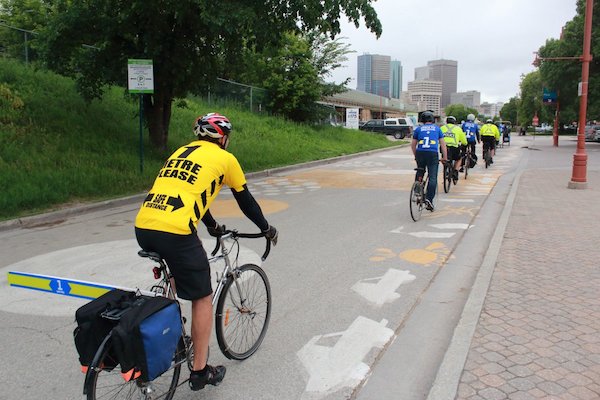 Cyclists at The Forks demonstrate how much distance vehicles should leave them during the launch of the ‘Please Leave Space to Breathe’ campaign on Friday, June 23, 2017. (@WPGPOLICE / TWITTER)

A new Manitoba Public Insurance campaign wants to get the message out to motorists to leave a safe distance when passing cyclists.

The “Please Leave Space to Breathe” campaign suggests a distance of one metre between a vehicle and cyclist on the road.

“At this time of year there are more cyclists on our roadways and keeping them safe is everyone’s responsibility, including the motorists they share the road with,” said Ward Keith

“Leaving one metre of space when passing cyclists is one simple way that motorists can do their part to help keep cyclists safe and give them the space they need to safely navigate around road hazards.”

On average, there are 180 bicycle-vehicle collisions on roads in Manitoba each year.

The campaign, which launched Friday at The Forks, is in partnership with Bike Winnipeg and the Green Action Centre.